My baking moved into the realm of the adventurous today as I took on the challenge of cooking that perfect accompaniment to cream cheese - the bagel!

What could be so difficult? You've got a breadmaker and an oven - roll your dough into doughnut shapes and Bob's your uncle, surely? Well no, it's not that simple. Firstly I had to leave the safety zone of the recipe book supplied with the breadmaker and go 'off-piste' with the recipe. Secondly, however, one of the critical elements of bagel cooking is that the raw bagels have to be 'boiled' before they are baked in the oven.

How can this possibly work?

So making the dough was as straightforward as ever - unusually there is no fat (in the form of butter or oil) in the bagel recipe - just yeast, flour, salt, sugar and water, but the breadmaker took it in its stride and delivered a firm dough that I divided into eight balls. Making the hole in the bagel essentially involves sticking your finger through the middle of the ball and twirling the thing round your finger until the hole is an inch or two in diameter - that worked ok, as well.

Leaving the bagels to rise in the airing cupboard for 15 minutes, I turned the oven on and boiled up a big pan of water. This was going to be interesting! The recipe called for the bagels to be boiled in batches - sixty seconds each, turning the bagels half way through the cooking time. I fully expected the things to dissolve when I put them in the pan, but no - they held their shape, actually puffed up a bit, and suffered the mid-cook flip without mishap. 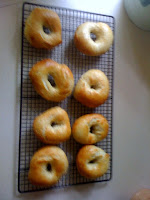 What came out of the pan were eight slightly sticky, but essentially firm, misshapen rings of dough that I then brushed with egg and stuck in the oven for fifteen minutes.

And what came out of the oven were - recognisably - bagels! Bagels that the supermarkets would have to sell off cheap as mis-shapes, but nevertheless bagels. After a short time cooling, they were sliced, toasted and covered in Philly.

And damn fine they were too! More to the point, they were definitely bagels - in taste, texture and (just about) shape - but far, far tastier than your average shop-bought bagel.

Yummy! Mark that one down as another success!

On a roll, we had home made pizzas for tea as well - a double whammy of success today on the baking front. Not sure its doing the waistline much good though...

In between all this baking activity, my eMusic credits had clicked up another batch of downloads, so I took the opportunity to get hold of some of the stuff introduced to me by Latitude last month. Albums by the Duckworth-Lewis Method, Broken Records, The Broken Family Band and The Phenomenal Handclap Band now await listening and appraisal. 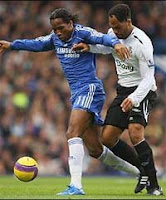 And the football season beckons, with Everton playing Coventry in a friendly (and drawing 2-2). Tellingly, Joleon Lescott was 'injured' and didn't play - this, coupled with rumours about Philippe Senderos joining from Arsenal, suggests that Joleon is off to City - sadly, but hopefully for shedloads of money. And in my alternative universe, Everton finished a disappointing eighth in the league - some great results offset by sloppy defeats to weaker teams and some appalling away form. Grudgingly, the board have given me a contract for the next two seasons on the back of this. So far in the close season, I've offloaded that troublemaker Cahill to Chelsea for silly money, and accepted an equally silly bid from Barcelona for Tim Howard, leaving me without a goalkeeper of any quality at the moment. Carlo Cudicini is, I think, coming in as backup, but priority is a decent keeper as soon as possible!

If you recall, I mentioned reading 'Man on Wire' a while back - the documentary was on TV last night so we watched that, fascinating stuff and really interesting to see some of the characters referred to in the book itself. Definitely worth watching.

I saw Al Green in Manchester last year and very good he was too, although I would have preferred more of his own material rather than the crowdpleasing Motown covers he thought he had to perform. One of the great soul voices, the good Reverend combines pure soul with gospel to great effect. The Anthology is a four-disc compilation that combines the obvious stuff with a range of live tracks, some interview snippets and other curiosities. Not the best starting point for Al - the two 'Greatest Hits' collections are far better in this regard - but still some interesting stuff in there for those overfamiliar with the regular stuff.

I may have given you this track before, but if so, I don't care. My favourite Al Green song, and one of my favourite songs ever, Belle describes his struggle to combine his love for a woman (Belle) with his God ("It's you I want, but it's him that I need"). Not sure why he can't have both, but there you go. In any event, a more beautiful melody and vocal performance you'll be hard pushed to find.