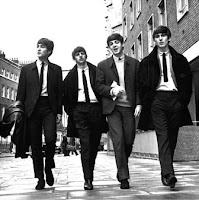 Looking back, I find it hard to believe I've gone through 146 days of this tosh and this is the first time that The Beatles have come up (in their own right) on the soundtrack. About time too, I say. There was an interesting feature in The Word last month, asking "Are The Beatles Underrated?". On the face of it, it's a ridiculous idea. How can the band that is, by common consent, the "best band ever", possibly be underrated?

But I think it's less about being underrated, more about being taken for granted. The Beatles are just 'there', and I think their genius is just taken as a given. For me, they've just always been there. Growing up in the '60s, on Merseyside, as a left-handed Paul, there was only ever going to be one band for me - and so it was, at least until they got a bit scary for an eight year old, around the time of the White Album.

My first ever musical memory (and, probably, my first moment of sheer abject terror) also centres around The Beatles. Picture the scene. It must have been early 1964, so I would have been four years old. Ebenezer Street, Rock Ferry, my parents' first house. Old terrace, outside loo, coal fires. I'm stood with my mum, watching as the chimney sweep goes about his work. The Beatles are on the radio. As the chorus plays, the sweep turns to me, white eyes prominent in his coal-dusted face, reaches out towards me and sings "I Wanna Hold Your Hand".

The other reason I'm surprised we've not had The Beatles on the soundtrack before is the sheer volume of Beatles stuff I own. All the studio albums, the BBC sessions, singles collections (including the one playing now), the Anthologies and a wide selection of bootlegs. 31 albums in total, before starting on the cover versions and the solo stuff.

Past Masters Volume 1 (of two) collects all the non-album singles, EP tracks and b-sides from Love Me Do through to I'm Down, the b-side of Help!, including the German language versions of I Wanna Hold Your Hand and She Loves You. The consistently high quality of the material just goes to demonstrate that The Beatles' cast-offs were generally better than most other bands' best material. Early Beatles - so the 'teenybop' years, straightforward pop songs before the experimentation really kicked in.

The Beatles. Simply the best - then, now and always.

Oh, and the joys of YouTube. Where do people find this stuff? Here are the boys in 1963, in Sweden, performing She Loves You. Possibly the best pure pop song ever written. And the harmonies on that final 'Yeah' still send a shiver down my spine.

So anyway, a quiet Saturday today. Mrs W was out in Chester meeting up with an old friend so I was left to my own devices for most of the day. After an early morning shop for the weekend's provisions, it was largely spent sat in the garden reading the paper, something I should do more of, I think.

Tea comprised enchiladas, eaten whilst watching Changeling, a very good film that is probably Angelina Jolie's finest screen moment (excluding the nude scenes in Gia, obviously). The 'true' story of a mother who lost her son to a serial killer, the crux of the story is the LAPD's insistence that they have found the boy alive - a child the insist she accept as her own despite the boy manifestly not being her son. A long film, but one that never outstays its welcome and one that is well worthy of a lend from Blockbuster or your video rental outlet of choice.

Oh sod it, let's have some more Beatles.