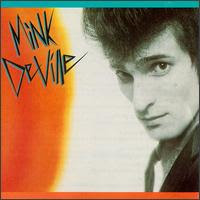 I learnt today that Willy DeVille, the driving force behind Mink DeVille, had died yesterday of pancreatic cancer. Willy who? I suspect many of you are saying. Who indeed. Mink DeVille were one of the original New York CBGBs bands, but a more different band to The Ramones and the like you would struggle to find. They played bittersweet tunes with a latin flavour, more soul than rock. Doc Pomus said of him:

“Mink DeVille knows the truth of a city street and the courage in a ghetto love song. And the harsh reality in his voice and phrasing is yesterday, today, and tomorrow — timeless in the same way that loneliness, no money, and troubles find each other and never quit for a minute.”

So nothing random about today's soundtrack - Cabretta was their first album, containing Spanish Stroll, their 'hit' - along with nine other sweet songs. Here they are performing Spanish Stroll on Top of the Pops back in '77.

Think you're so slick? Well all right...

A busy day today, with one thing and another. Had to take Pedders to the vet today for his boosters and a general health check. In the past, with our other cats, the big problem has been getting them in the cat basket in the first place - always involved a fight, scratches and yowling. Pedro? I opened the door of the basket and he just walked straight in. Bless him.

Because of his bowel problems (already discussed on here in far too much detail) he's a bit of a celebrity in the vets, and they all seemed pleased to see him fit and well. Got a bit of Pedro's history from the vet as well - don't think we really realised just how poorly he'd been, that it was touch and go as to whether his bowel operation would work at all - happily it did, and his checkup confirmed he's fine, although we do need to watch his diet carefully.

Then in the afternoon it was off to the Job Centre for my 13 week 'interview', which was with a nice lady who went through my 'Jobseekers Agreement' with me. This is the point where I am supposed to face facts, and recognise that I'm not going to get the highly paid job I've been looking for on my doorstep and reassess my job-searching parameters. Basically, reduce your salary expectations, widen the type of job you'll consider and the distance you'll travel to get there.

Fine in theory, but in practice is likely to lead to lots of pointless applications for jobs I'm overqualified for, or for which there will be far better candidates out there. Yes, in theory I am perfectly qualified to apply for financial controller roles paying £25k a year, but no-one in their right minds is going to actually employ me to do that! Luckily the lady I was interviewed by was sensible enough to understand that so we did what we had to do for the 'system' and that was that. We discussed the need for a further meeting in a couple of weeks time and agreed there was no point in having such a meeting - very sensible.

In better news, I had a call from the agency regarding one of the jobs I've applied for recently, and I've been selected for interview in a couple of weeks' time. Still a long way to go, but definite progress!

Everton's final pre-season friendly this evening, home to Malaga. Couldn't raise the enthusiasm to actually go, but apparently they performed very creditably in winning 2-1. Joleon Lescott played, and it now begins to look like he'll be staying, which would be good news. Goals below - look out for Malaga's consolation goal - a cracking free kick!