Day 157: Letting the Side Down

Today's soundtrack: The Long Blondes - Someone to Drive You Home

You may not be aware, but I receive occasional correspondence from the regular readers of this blog. Now the bulk of such correspondence is generally positive. However there is a clear feeling from certain (male) correspondents that I am letting the side down a touch - or, at least, setting a dangerous precedent - by describing my adventures in the kitchen with such relish.

"Women's Work!" I can (almost) hear them saying. "Don't be giving them ideas, Paul!" they (might) be thinking. 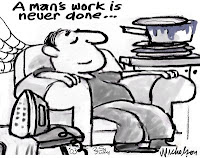 Best keep all this between us, eh? If it's any consolation, Mrs W cooked the tea tonight.

And very nice it was too, dear.

(You might be thinking, how slow is he, taking the best part of two days to do the ironing? Well as I might have suggested previously, it's volume, not speed, that's the problem here. If I hadn't started ironing today, I'd have been walking round in work shirts and swimming costumes, since they're the only things left in the wardrobe).

I wasn't expecting to have the day clear, but unfortunately a meeting with a firm of accountants in Manchester was postponed at the last minute - will now happen in early September. A shame, but at least the meeting hasn't gone away, and was rearranged very quickly and efficiently. I also got a call from another old mate today, checking up on things and suggesting a few people I could contact in the drive to get back to work. Good to know that people are out there, thinking about me and trying to see me right.

The Long Blondes were an indie band from Sheffield, who produced two very good albums in the last couple of years and then split up suddenly, apparently due to illness in the group rather than the usual 'musical differences' (unlike The Housemartins, who split up due to 'musical similarities', according to the press release). 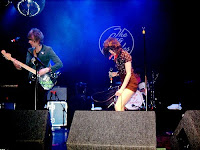 I saw The Long Blondes for the one and only time at Glastonbury in 2007, on the Other Stage in the pouring rain and about three feet of mud. Despite the inauspicious surroundings, they brought a little ray of sunshine to a quite dispirited crowd and I enjoyed them a lot. Sounding like a cross between Pulp and Blondie, their songs are mostly about relationships, either failing or failed, and are peppered with music and film references. And they have tunes, which is always a good thing in my book.

All that's good about them is encapsulated in four minutes below - "Weekend Without Makeup".