Remember the Eccles Cake thing? Remember I suggested that the microwave might be an appropriate way of warming the things up?

Well don't. Or if you do, warm your Eccles Cake on the lowest heat setting for the shortest possible time. I warmed my Eccles Cake on full power and went off for a few seconds to, ahem, powder my nose - and came back to a kitchen full of smoke, and a comestible that was hissing and spitting in a most alarming way indeed.

I'm not a huge expert in these matters - but I believe that in theory, microwaves cook from the inside out? Whatever, once the raisin molecules got set to shakin', they decided to go nuclear in very short order indeed - I'm talking within the first twenty seconds or so!

So think on - and warm your Eccles Cakes elsewhere!

(Luckily I had another one in reserve that went under the grill - with the obligatory slice of Stilton on top. And very good it was too.)

Applied for a job advertised in Cheshire this morning online - and had the agency call me within ten minutes of the application being submitted. Meeting with the recruitment consultant now arranged for Monday - let's see if this gets us anywhere. Looks like an interesting role, and one that I feel well suited for, but there's a lot of people out there who could probably say the same thing. Salary could be more attractive, but I'm not in a position to quibble too much about that at the moment - it's more than £60 a week, for starters! 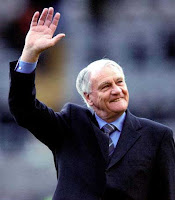 Sad to hear of the death of Bobby Robson today - a real gentleman and a man who clearly loved his sport dearly. He will be missed, and I hope those who treated him so shabbily at times in his life - I'm looking at you, tabloid editors and Newcastle directors - have the grace to recognise this and apologise to his family. I'm not holding my breath though. I recall him being routinely ridiculed and rubbished by the tabloids during his time as England manager - the same tabloids who I am sure are falling over themselves to print the most gushing obituaries as I type. I understand he nearly became Everton manager at one stage - the deal was done, with the proviso that Bobby would break the news personally to his directors at Ipswich before completion. Unfortunately the deal was 'leaked' to the directors by persons unknown, and Robson, on principle, then chose to stay with Ipswich. A bit more principle in professional football today would not go amiss.

Oh - in passing - Everton have now clawed their way into the top seven, although are out of both domestic cups (at the hands of Chelsea each time - in the FA cup on penalties following a replay). Still in Europe after topping our UEFA group with a tough match against Napoli to come. Not bad for a rookie manager, I feel - yet the bleeding ingrates making up half the team are all angling for moves to 'bigger' clubs. No chance - they can rot in the reserves before I'll sell them. And yes, that includes you, Tim Cahill. 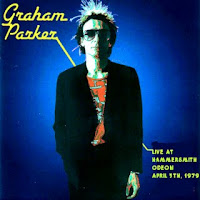 Graham Parker is one of the great 'lost' voices that came out of the punk era. Often lumped in with other 'angry young men' of the time, like Elvis Costello and Joe Jackson, Parker had the advantage of a really tight band (made up of members of Brinsley Schwarz and other remnants of the pub-rock era) that was probably bettered only by the Blockheads at the time. More soul than punk, his early albums (Heat Treatment, Howlin' Wind) were tight, focused gems packed with great songs. His masterpiece is probably 'Squeezing Out Sparks' released in 1979 to great critical acclaim.

Today's soundtrack comes from the same year, a bootleg of a show at London's Hammersmith Odeon promoting the Squeezing Out Sparks Album. And mighty fine it is too. Well recorded (I assume a soundboard or a radio broadcast) and including tracks from the new album with a smattering of earlier hits, it was deserving of an official release. He was a great live performer - both on the small stage (I saw him at Sheffield University in 1978) and on the big (he was the 'token' new wave performer at Dylan's Blackbushe show in the same year).

To give you a flavour, here's GP performing 'Passion is no Ordinary Word' a few years later. Tune!