Got myself out of the house today, and into Manchester City Centre...I had a meeting with a recruitment consultant, and had arranged to meet up with one of my ex-colleagues for a coffee beforehand. Plus Mrs W had tasked me with getting a couple of her posh watches re-batteried.

Before that though, I had a good half hour on the phone with my Birmingham mate, on the wind-down before heading off to Malta for a week or two. All seems to be ok in Brum at the moment, but it was good to spend a while putting the world to rights!

Off into Manchester then, and after dropping the watches off at Debenham's I headed down to Spinningfields to meet up with Ann-Marie. Got a sneaky peek at the inner part of the new offices, which was nice, before heading off to Cafe Nero for a quick cappuccino and a catch-up on the gossip. Again, all seems well enough at the old place despite the ongoing upheavals that I've alluded to in previous blogs. Oh, and Ann-Marie thinks I should jack it all in and move into catering full-time. And she might be right!

After coffee, it was off to meet with the recruitment consultant. This is an agency I've been registered with for a while, so they know enough of me to be comfortable of my suitability for the advertised role, and they feel pretty confident that I will get a chance to speak to them directly in the not too distant. The meeting was less about me, and more about the detail of the role, which again is encouraging. It does look like an interesting role, and one I know I could fulfill, but as we know there's a lot of competition out there and it would be dangerous to take anything for granted.

That said, I came out of the meeting feeling pretty good about things and felt I ought to engage in a bit of retail therapy. So I did. Nothing silly, but I needed a replacement case for my iPhone, the existing case having split at the headphone socket. The perfect excuse to indulge in a bit of gadget fetishism in the Apple Store! Naturally a quick trip to Fopp was also called for, resulting in a few CDs (none costing more than a fiver) to add to the collection - including some Depeche, Kev! Then it was back to Debenham's to pick up the two watches - both now working (although the back of one of the watches detached itself when I got it home - I'll need to drop it off again next time I'm in town).

Back home then, to let Pedro out for a run, and to catch up on my housework(!) Mrs W wanted a loaf for sandwiches, so the breadmaker got yet another runout, and the kitchen needed a bit of a tidy-up generally, which it got. Mrs W has given me a list of chores for the rest of the week, so I'll need to show some progress there, in between my drive to get Everton up the league table (brutal pre-season by the way, flogged lots of underperforming prima donnas, and bought in a load of kids who might actually want to play for me...that's the theory anyway). 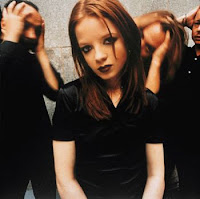 Garbage on the soundtrack today - not literally, the group of the same name. They seem to have gone a bit quiet of late - have they split up? But their first few albums are full of choons with a bit of bite to them and although they are never at the top of the playlist, they are always worth a listen.

So have a listen to this - it's 'Shut your Mouth' performed live at the Electric Ballroom back in 2002. Oh, by the way Ann-Marie tells me she stops reading these thing when it gets to the 'music bit' so I can say what I like about her now........

Great article today Paul!! It was great to see you again and I will keep my fingers crossed for you!!