Today's soundtrack: The Clash - From Here To Eternity

Mrs W and I have spent the last few days as entertainers and entertainees, with family and friends up and down the country. Firstly, Son No 1 came up for a couple of days, en route to holiday with his girlfriend and family in Skye, then Mrs W and myself went darn sarf to stay with a friend in Titchfield, down Portsmouth way.

Got up to the usual stuff with Son No 1, generally involving visits to family, eating nice food and watching dodgy films. We let him sample the Waring Pizza Experience, this time with added Garlic Bread, made on an additional (home-made) pizza base, spread firstly with crushed garlic in melted butter, topped with mixed herbage and some mozzarella and cheddar. Very tasty indeed, although there was a bit of consternation in the cooking process as the 'bottom oven', which spends most of its life as a grill, got just a wee bit smoky at the high temperatures required. Mrs W took a fair amount of convincing that I wasn't actually trying to grill the bread - and I'm still not convinced she really believes me!

Anyway, come Friday, we dropped Son No 1 off at his meeting point (to be collected again in a week or so's time) and we headed off down the motorway to Robin's cottage in Titchfield. Using my iPhone's new Satnav application instead of the TomTom. It worked really well, only having a bit of a wobble at the A34/M3 junction. 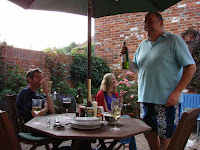 Weather was fine, which was lucky because we were having a barbecue with some more old friends that evening. But not before a quick trip to the local pub - the dogs needed a walk, you see - to sample the local brews. 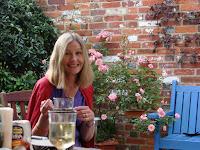 Back at the cottage, Gail and Phil arrived and we sat out in the sun and ate and drank. And talked and drank. Then we drank a bit more. Mrs W admitted defeat around midnight, just before Robin's neighbours joined us for a bit more chat and a bit more drinking. Eventually things wound up around half three/four. 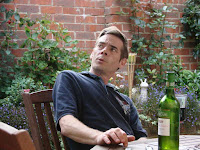 Woke up the following morning feeling remarkably sprightly, considering the previous night's excesses. Unlike some others, I might add. Phil and Gail left (after promises of a repeat match at theirs in November, and Gail's commitment to a Glastonbury trip next year - I won't forget!) after breakfast (barbecued bacon rolls - yummy!) and we settled down to a lazy Saturday - we walked the dogs, bought the paper and kicked back.

Robin and Mrs W then went out for hair of the dog and I made the mistake of staying in to listen to the football.

I suppose it might just be the kick up the arse the club obviously needs. If there was ever a game to miss, that was the one, I guess.

After a lovely tea of chicken cooked in garlic and coriander with new potatoes and salad, we settle d down to watch Indiana Jones on Robin's television. Actually 'television' sells his kit a bit short, being a 50" high def plasma behemoth that makes our ageing box look like a portable. When the ship eventually comes in, I think we may need to do something about our telly. But not just yet!

Up early on Sunday for the long drive home, which happily passed without holdup or incident, to be greeted like long lost family by an evidently puzzled Pedro (looked after in our absence by our wonderful neighbours - thanks Andrew and Natalie!)

Overall, a really pleasant few days both up here and down there. We should do this more often - although not too often, as I'm not sure my liver could stand it!

Given the blog title, you'd have hoped for some Jam on the soundtrack, but iTunes chose fellow punxters The Clash. From Here To Eternity is a live album, collecting together tracks from various Clash performances across their career. This gives the album a bit of a disjointed feel, but does not detract from their power as a live band. I saw them twice, I think, both times in Sheffield and they were superb both times. Possibly the most intense live experience I've had, and very difficult to capture on film.

Here they are in Manchester, back in 1977. Rough as old boots but full of passion and power. He's in love with rock and roll woah!

I'm also a resident of Titchfield. Let me know next time you are in that neck of the woods!

ooh honey please get that AWFUL picture of me off the site!!!