Just finished reading Yasmin Khan's account of the 1947 post-independence partition of India and Pakistan, 'The Great Partition'. It's an area of 20th Century history that I was generally aware of, but had no real knowledge of beyond the fact that it was hugely traumatic and cost the lives of (probably) millions of ordinary people. My interest was piqued by reading Sanjeev Bhaskar's book about India, particularly his return to his ancestral home in present-day Pakistan, where he touched on the horrors of Partition but without going into detail. So I wanted to read something more in-depth on the background to independence and Partition, the human impact and the aftermath.

So what have I learnt? Not as much as I thought I would, actually. That's not the fault of the book, which seems to be well-researched and well-written, more my inability to get my head around the scale of the upheaval and the attendant tragedy. It seems clear that, post WW2, Britain simply wanted to get out of Asia as quickly and as painlessly (for Britain) as possible - almost 'you want independence, you've got it - now you deal with the fallout'. Hence independence was rushed through and the key issue of multiculturalism was not really thought through. In the early stages, the concept of 'Pakistan' was more amorphous than it became, referring more to protection of minority Muslim rights than creation of a separate country/countries - although inevitably as tensions and violence erupted, partition seemed to become the 'least worst' solution to the problem. Incredibly (with hindsight) no-one seemed to recognise that the creation of separate Hindu and Muslim states would inevitably lead to mass migrations as people moved (voluntarily or forcibly) to 'their' state. States with hastily-drawn boundaries, drawn up hundreds of miles away by Britons with no understanding or feel for the real issues in existence along the proposed boundary line.

Something a touch lighter for my next read, I think.

On the job front, I applied for a couple of jobs on-line today - one in the Midlands (one you tipped me off a while ago, Kevin, I think) and one Darn Sarf. Spreading my net ever wider, you see. 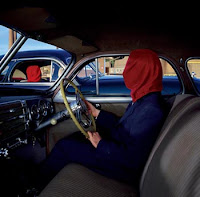 With music on shuffle while finishing the ironing, I had the dubious pleasure of listening to 'Frances the Mute' by The Mars Volta. My God, that was hard work! Back in the day, this music would have been described as 'prog' along with ELP, Yes, King Crimson and the like. But this stuff has the prog dial turned all the way up to 11. Difficult time signatures - check! Indecipherable lyrics and song titles - check! Hipgnosis cover art - check! Tunes - er, no, sadly.

Cassandra Geminni: B. Plant A Nail In The Navel Stream

That should tell you all you need to know about The Mars Volta! 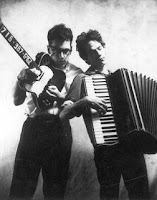 Phew! Heavy heavy blog today! Luckily the soundtrack is a lot lighter - arch American funsters They Might Be Giants today, with their 'hit' album Flood. Short, snappy songs, melodic but generally a bit too pleased with themselves for my taste. A little bit 'look how clever we are', if you know what I mean.

Their 'greatest hit' was 'Birdhouse in Your Soul', performed here on TOTP:

Labels: The Great Partition, The Mars Volta, They Might Be Giants

is this the same 'they might be giants' that did the theme song for malcolm in the middle? really doesnt seem like it! Is this the bunch that also did particle man too?

or am i completely off track on both?

Dunno about 'Malcolm in the Middle' but deffo the 'Particle Man' band - one of the tracks on 'Flood'. I'd be surprised if there were two 'They Might Be Giants', though!