The footy season, that's what. It's been a long summer (summer? What summer?) but here we are, back at Wembley for the 'traditional curtain-raiser' that I shall always refer to as the Charity Shield. Manyoo vs Chelsea (oh, it could have been us), and a tasty fixture even though it is, nominally at least, a friendly.

Should be an interesting pointer to the new season's title challenge as well - how will the Ronaldo-less United fare, compared to the Hiddinck-less Chelsea? Will either be as strong as they were last season, and what does that mean for the likes of Big Red and Arsenal?

1. Nani is no Ronaldo. Excellent goal notwithstanding (helped by Cech and Terry getting in each others way) he still flatters to deceive and was totally culpable for leaving the hugely underrated Carvalho unmarked for Chelsea's equaliser. Also helped by being up against The World's Worst Right Back in the first half.

2. Ben Foster is no more England's next goalkeeper than I am. And I'm rubbish. Expect The Other One to be in goal for United next week.

3. Notwithstanding the inconsistency of refereeing surrounding the second Chelsea goal, play to the whistle!
4. At last United are playing The Boy in his natural position. The (offside) goal was reward for an excellent all round performance.

6. I fancy Chelsea more than United this season.

Other than that, it was a quiet day, really. Got out into the sun in the morning, baked some bread, ate some bread (with some air-dried back bacon and pork, chilli and fresh coriander sausages), made a few phone calls and ploughed our way through a couple more episodes of The Shield (now approaching the end of Season 4). 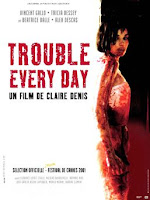 Tindersticks were last on the soundtrack way back on Day 24, when the magnificent 'Hungry Saw' came up on shuffle. Trouble Every Day is actually a soundtrack album, to a French film of the same name that I have never seen, nor am I likely to given Mrs W's not unreasonable aversion to anything involving subtitles.

Most of Tindersticks' music seems to have cinematic overtones that make it appropriate for soundtrack work and the mood of the album does match the film's rather downbeat themes of lost libido and imprisonment. That said, it still works well as an album in its own right.

Here's the title track, played over the opening credits of the film.