My first appearance at Goodison this season, having missed the debacle on Saturday. The rest of the team had bailed out of the pre-booked cup ticket programme so I was by myself, so got there in plenty of time to chow down on a meat & potato pie (but no beer - none for sale tonight - is this a European thing? Don't remember it from last year).

Most of the 'regulars' were there, although the seats next to me were taken up by four Czech supporters who were very pleasant and well-behaved all game. Better than I would have been, when they saw what looked like three stonewall penalty appeals turned down by a referee even I have to admit was a bit of a homer.

But that was still to come. A few boos and chants about Joleon, which - given he was watching from the stands - will have done nothing to make him want to stay, although the rumour mill suggests Steven Taylor from Newcastle may be on his way soon. Sooner the better really, because for all his skills, Phil Neville is not a centre-back. He replaced Joleon, with Jack Rodwell coming into midfield and Saha starting up front in place of Jo.

First half hour, we were awful. Two very strong penalty appeals against us, Howard forced into a spectacular one-handed save and Sigma were cutting through us at will. The midfield looked like strangers, Saha was isolated up front and we were gifting posession and second best in the tackle everywhere.

Then we scored. A neat near post dink from Fellaini, and Saha scored a real poachers goal just in front of his defender. Five or so minutes later it was 2-0, Rodwell picking up a rebound from a Baines free kick and drilling home a shot from around 25 yards. The goalkeeper 'will think he could have done better' as they say.

Immediately the whole game dynamic shifted as the team relaxed and started playing with some confidence. Cahill pushed further forward to support Saha, passes started finding their man and we used the flanks to far better effect. 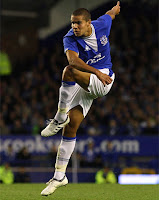 Soon it was 3-0, with Rodwell scoring his second goal, and the pick of four very good goals on the night. The ball was fisted out by the keeper to Pienaar, who squared it to Rodwell, who again 25 yards or so out blasted a fierce shot into the net off the underside of the bar. Good to see us shooting from distance more - the boy has certainly got a shot on him and he can keep thing thing down, as well. He nearly got his third from a quick free kick a few minutes later - firing about a yard wide with the keeper beaten.

The fourth goal was Saha's second, a lovely shot into the corner from the edge of the box. By now the team were playing more like last season, with confidence and accuracy in their passing and a desire to show for the ball. Sigma still threatened on occasion - they are no mugs and I'm delighted we're going over there with a decent cushion - we might need it!

Burnley away at the weekend -not looking forward to that, especially off the back of their win against the Mancs yesterday - but if we play like they did in the second half tonight, we'll be all right.

If we play like we did in the first half hour - we'll get battered!

In other news, my interview details have been firmed up for next Tuesday, so plenty of time to do my research and preparation. First on, I suspect, so I need to put a real marker down for the other candidates to (hopefully fail to) measure up against.

Spent the rest of the day cleaning the en-suite shower room off our bedroom. Smallest room in the house, but the muckiest. No longer, thanks to a couple of hours of elbow grease, limescale remover and general scrubbage. I'd show you a 'before and after' picture but I'd be too embarrassed. 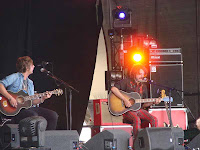 Delighted to hear The New York Fund coming up on the soundtrack today. I wrote about them at length recently on my Latitude blog - the Guns EP represents the sum total of their purchasable work, I think - via iTunes or eMusic anyway - and very good it is too. Remarkably there is loads of their stuff on YouTube as well - right here.

Buy their stuff and give money to this band - they're saving up to go to New York!

Here's the video for 'The Guns of Camden Town' and mighty fine it is too.

Very interesting Paul.Did you ever consider journalism?? Good luck with your interview
Steve

You can have Taylor, I think he's seriously overrated. Good tackler but often in the wrong place!
Good luck tomorrow.
David