Well I spent most of the day working today - not working for money you understand, although I suppose I was in a way...we've got to the stage where the mortgage insurance kicks in, so I was preparing the first claim for submission. That involves a touch more than filling in a simple form, I have to provide clear evidence that I am not only still out of work, but that I am actively seeking work as well. So I spent the best part of the day collating and printing emails and application forms, rejection letters and the like, summarising all my recruitment-related activity onto three or four pages and cross-referencing the lot to the 'source documentation'. It was actually quite a satisfying exercise in that a) there is actually a lot been going on - a lot more than it feels like sometimes and b) it's brought a bit of order to what, i suppose, has been a pretty disjointed process.

If I was half as organised as I should be, then I'd have kept things in order as I'd gone along, but that's not really my style (out of the formal work environment anyway). I now need to get the paperwork signed off by the Jobcentre, then I can send it off to the insurance company, hopefully in return for a big fat cheque.

In the midst of all this I had a long chat with Simon down in Southampton, who called for a natter. We put the world to rights for a while, reminisced about festivals and swapped details of new music purchases. And I remembered that I still have to send him the photos and music from Latitude that I promised him! Good to catch up with him - it's a pig that he's in the same boat as me but it's good to have someone to compare notes and experiences with as well.

After all that exhausting labour(!) it was time to relax with a session of Footy Manager. To my delight (and to the indifference of the Board) I beat Chelsea in the final of the League Cup on penalties - so back in Europe next season, something that was never going to be achieved through my league placing!

Unfortunately reality intervened after a while, I had to go and 'rescue' Mrs W, whose car has been playing up for a while - a 'burning smell' that seems to appear when she uses the car, even on short runs. A strange one, in that no warning lights are coming on to suggest oil or water levels are low, and no evidence of any electrical faults. Anyway, we swapped cars, and took the poorly one to the garage for a check-up. Diagnosis tomorrow! 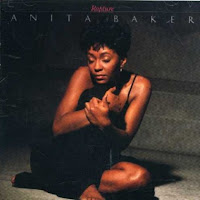 Rapture is one of my favourite 'smooth' albums, a combination of excellent songs, and wonderful, understated singing, delivering an album for those times when the mood is relaxed and the lights are low. Anita Baker really knows how to sing, in an understated way that the Whitneys, Celines and Mariahs could learn from - no vocal gymnastics, no desire to fit ten notes in where only one is needed - beautiful.