After our busy weekend, it was time to kick back and relax a bit. Mrs W had the foresight to book the day off work and, with it being our wedding anniversary tomorrow (Eight years! Who'd have thought it?) we decided to have a nice lunch at one of our local pubs.

So off to The Stretton Fox, at the end of the A49. A nice country-style pub, in a very quiet area (remarkably so, since it's right on the junction with the M56) that always seems empty, no matter how many cars are in the car park, due to the shape of the building (lots of rooms and nooks and crannies - which apparently makes it a good place to conduct a romantic tryst, not that I'd know about such things). I first went to the pub with work colleagues, when we were pitching for some work in Warrington, and I was struck with the quality of the menu - all good, quality, home-cooked fare. Imagine my disappointment a few weeks later when I was over in Bradford pitching for some more work, and went into another local country pub to find exactly the same menu in place!

Anyway, chain or not, the food has been consistently good there so what the heck. I ordered the 'Hunter's Chicken' - chicken, bacon, cheese, barbecue sauce and chips. And a couple of veg and something that might have been cabbage, might have been lettuce but which all went down nicely with a pint anyway.

Mrs W had the good sense to order the fish and chips, which should more truthfully been described as whale and chips. Not sure I've ever seen a bigger hunk of battered fish on a plate. Needless to say, she couldn't finish it, so the remnants got parcelled up for the Pedderoni to enjoy.

Replete, we then headed off to Sainsbury's for Mrs W to peruse the remarkably cheap but surprisingly smart clothes racks, and for Paul to wander round with the trolley doing the 'proper' shopping. It's another Aussie Steak Combo tonight, with new relishes enjoyed over the weekend and with different steak, Mrs W taking exception to the Sirloin that we bought the other week (Too tough. Obviously a problem with the meat, not the cooking. Ahem.) I went for some ribeye this time and despite her misgivings (it's got a big lump of fat in it!) the meat was perfect. Alongside the bacon, cheese and fried onions.

Bit light on the 'five a day' today, but never mind. There was some additional fruit in the cider I had with the Combo, to keep the scurvy at bay.

(As an aside, I knew someone who had caught scurvy once - a consequence of a student diet obviously lacking in anything resembling a vitamin. I was actually quite impressed - thought it showed real hardcore devotion to the student lifestyle! Not to be recommended though children.)

Had a very quick chat with Son No 2 in the evening, curtailed as we were halfway through an episode of The Shield (Series 5 now) when he called. He's gutted that his 'free' Reading ticket fell through at the last minute, but fairly committed to going next year. Where will this leave Glasto in his social calendar? 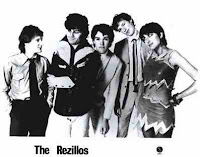 iTunes has obviously got a bit of a fixation with late '70s punk/new wave at the moment, throwing The Rezillos into the mix today. Firmly sat at the 'cartoon' end of punk, this bunch of Scots made a pretty entertaining noise and didn't outstay their welcome. 'Can't Stand...' pulls together everything worthwhile they ever produced together, alongside a few live tracks and other odds and sods. Led by Eugene Reynolds and Fay Fife (thirty years on, I finally realised her name was a pun on her home town...she's "fae Fife"...geddit? Oh please yourself...) the group also included Jo Callis, who went on to add a lot of the pop trimmings to the Human League (version two, that went stellar with Dare).

Here's Top of the Pops (albeit performed on shortlived pop show Revolver) back in 1978: