Today's soundtrack: The Undertones - The Sin of Pride

Now I wouldn't want you to get the impression that we live in a house that is in less than pristine condition at all times, but I am sure it is no coincidence that whenever we have guests to stay, their arrival is generally preceded by a whirlwind of cleaning activity that just doesn't happen when it's only the two of us.

And so it was today. Mrs W's bessie mate from Birmingham was coming up to stay overnight, with her bloke and two kids. Mrs W was at work, so I was given my list of chores. Up early, washing machine on. Two spare beds made up, clean sheets, duvet and pillow cases. Kitchen floor swept and mopped. Washing on line, dried in the tentative August sunshine and finished off in he dryer. Spare sheet taken from the dryer and used to finish off the bed-making. Clean towels in the bedroom.

And after all that, I mowed the lawn as well! Phew!

All finished by five, at which time I was able to flop down in front of the telly to watch the (not so) mighty Blues in action in the Czech Republic, the second leg of the Europa League qualifiers. Going into the game with a 4-0 lead, you'd expect it to be plain sailing. And, ultimately, it was. But Everton being Everton, we had to make it difficult for ourselves along the way. This time, by contriving to get Tony Hibbert sent off after seven minutes, leaving us with 10 men for the bulk of the game. Happily, after the inevitable wobble, we took advantage of the aggregate cushion to sit back and invite Sigma onto us, soaking up the pressure relatively easily and, eventually, taking the lead just before half time. 5-0 on aggregate, an away goal, leaving Sigma to get 6 goals from somewhere if they were to go through. Happily, Sigma are not Arsenal, and the rest of the game was played out like a training match, Moyes taking advantage of the lead to give two of the kids (Baxter and Wallace) a run, and even giving The Yak a late stroll to help shake off some rustiness. Sigma got an equaliser from a well-worked free kick, but the game had been over as a spectacle for a long while by then.

Elaine and Billy did not turn up until about half eight, so we managed to squeeze in yet another Shield before they arrived. Off to bed after a bit of chit chat, airport run tomorrow! 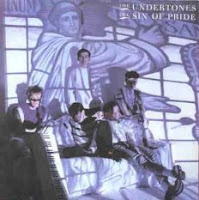 The Undertones started off as a bunch of skinny, feral kids from Derry, churning out some of the catchiest, poppiest, punkiest songs of the late seventies. Teenage Kicks obviously, but also Get Over You, Mars Bars, Jimmy Jimmy and My Perfect Cousin were all pure pop music with a touch of bite. Over the course of their four albums however, they matured and developed dramatically as a band, losing most of their audience in the process but still producing some magical stuff. The Sin of Pride was their final album, by which time they'd adopted some soul stylings and started writing about more than Chocolate and Girls. And a fine album it is too, possibly their best. Love Before Romance, Got To Have You Back, Chain of Love and the marvellous Love Parade hinted at a group just discovering their potential. Sadly there was to be no more from the original Undertones, Feargal Sharkey going solo before becoming an important record business executive (really!) while the O'Neill brothers formed That Petrol Emotion, adding a harder, political edge to their music.

Here's the video for The Love Parade, a great song by any standards.

I'm sure Sylv will do a fantastic job for you. And I'm equally sure the rag-tag bunch of Watford and Wigan rejects we'll bring in to replace him will help condemn us to the Championship.

Great to see some Undertones featured on the blog at last! I remember seeing the hugely underated That Petrol Emotion playing a fee gig on the beach at Brighton back in the mid-eighties and being mightily impressed. There wasn't quite the turn out(!) of the notorious Fat Boy Slim gig years later when tens of thousands crammed themseves between the sea and the prom, but a great night nonetheless.