Today's soundtrack: Eli 'Paperboy' Reed and the True Loves - Roll With You

A quiet one today, with all the chores done in the week and no shopping to do. I sent Mrs W down to the village store for one or two things needed for tonight's tea, then settled down with the Saturday paper for the morning. Time was, Saturday's paper resembled the rest of the week's editions with the Sunday behemoth being the one with all the extras. Nowadays, both weekend papers are stuffed to the gunnels with gubbins and, if anything, it's the Saturday edition that appeals more. Especially when Sundays are taken up more and more with football, delayed from Saturday because of European commitments or Sky requirements.

With it being the bank holiday, the paper had extra puzzle supplements which might while away another few hours in the week - especially now the nights are drawing in!

With the paper open, I only kept half an eye on the GP qualifying, which seemed to turn accepted wisdom on its head - both Button and Hamilton failing to make the top ten and the Red Bulls struggling. A Force India on pole? What's that all about? Maybe it's now time for Rubens Barrichello to make a charge for the championship - anything is possible in this topsy turvy year.

I caught bits of the ManYoo/Arsenal game on the Sky Player on the computer. Unfortunately the feed got worse as the game continued, constantly buffering, so I pretty much gave up after the first half and concentrated on the evening's culinary exploits. Never get this problem with my snide Asian feeds! 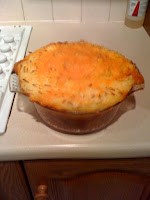 Back on the cottage pie tonight, stuffed full of mushrooms, carrots and celery alongside the meat, with a healthy topping of cheesy mash. You've already had the recipe on Day 54 so I won't repeat it here - just gaze upon its majesty opposite!

Very nice it was too.

While I was cooking, with Mrs W happily ensconced in the lounge watching the X Factor, I watched a bit of the day's Reading coverage, confirming that a) despite his general aceness, Ian Brown couldn't carry a tune in a bucket and b) Enter Shikari are awful beyond compare. Then I chanced upon a Seasick Steve documentary on BBC4, which was worth the price of the Freeview box alone.

We watched The Reader tonight - a bit worthy for us, given our normal film selection, but very good. At least it was until the lights went out - I missed the last half hour or so due to excessive sleepiness, no doubt brought about by excessive drinkiness!

Eli 'Paperboy' Reed on the soundtrack today - if you've not heard him, you should seek him out. A young white American boy, with the voice of an Otis or a Wilson. Retro soul stylings, but done well and with an understanding of the music that Amy Winehouse could never hope to achieve.

Here he is on Jools last year, giving it some welly. Beyonce's sister on backing vocals, celebrity spotters!