Some more minor culinary triumphs today, again involving the breadmaker - the invention of which must be the best thing since, er, sliced bread, and which clearly represents the pinnacle of human achievement. Apart from the iPhone, of course.

Highlight was probably luncheon, BLTs made with grilled back bacon, iceberg lettuce and vine tomatoes on freshly baked bread spread with mayonnaise - bread so fresh it couldn't be cut with an ordinary bread knife, only an electric knife was capable of dealing with the loaf's combination of crustiness and squishiness.

BLTs were eaten whilst watching qualifying for the European Grand Prix. It should be an interesting race tomorrow, Hamilton on pole in a McLaren that now appears to be competitive again. The Brawns and Red Bulls are there or thereabouts, with Button a rather lacklustre fifth on the grid, behind Vettel. The resurgence of McLaren is probably the best thing that could happen for Brawn, if it stops Red Bull from dominating the second half of the season. McLaren are too far off the pace to catch Brawn themselves, but they could do enough to stop Red Bull gaining the points they need to overhaul Button. It should be a very interesting second half of the season!

My second minor culinary triumph came at teatime. Not so much with the main meal itself, a Sainsbury's curry just flung into the oven (hugely tasty though said curry is), rather with the accompaniment - the chapatis. I realised that I'd forgotten to buy any chapatis so, if our feast was not to be chapati-free, we either had to haul ourselves down to the supermarket to buy some or - genius! Make our own!

So that's what I decided to do. The breadmaker could take care of the messy mixing stuff, and I would do the rolling and cooking. I eventually found a recipe on t'internet since my own cookbooks were silent on the subject - no easy task since most recipes were either American (measuring quantities in 'cups' - no use to me) or were vague about quantities. No use for me - it was only the quantities I was interested in, there's hardly a massive list of ingredients for a chapati (flour, water, salt, if you're interested).

So everything got chucked into the breadmaker and I decided to go with the pizza dough programme. No rising to worry about, just mix it all up and give me a lump of dough to play with. While all that was going on, I got chatting to my old colleague Noordad on this new-fangled Windows Messenger thing I'd decided to switch on today - he kindly offered advice if I needed it, but thought I'd best make my own mistakes first. I may be wrong but I think it's Ramadan at the moment, so it was probably a bit cruel to be talking food with the lad while it was still daylight!

Anyway. The dough came out a bit too sticky, but with a bit more flour I got it into a manageable state. Breaking off golf ball-sized lumps, I rolled out a batch of very thin circles and dry-fried them in the frying pan. And they were pretty good, actually. I thought they'd puff up more than they did, but what came out of the pan was recognisably chapati-ish and did a grand job of mopping up the curry sauces. Typically, Mrs W preferred the ones I'd cooked for slightly too long and had gone a touch crispy in places, but I think I got the balance right with most of them. No pictures, I'm afraid.

Mrs W has regained the will to live, with the return of X-Factor. I remain unmoved. For the first few weeks we are in the 'care in the community' phase of the competition, which I am always slightly uncomfortable with. It's the modern day equivalent of going to see the inmates at Bedlam, in my view. At least child abuse is less of a concern here, unlike Britain's Got Talent, as there are some age guidelines in place to prevent really young competitors being traumatised by the stress of the competition and the bullying of their parents.

Bit of disco on the soundtrack today. I've got quite a few of these "The Best......Album...Ever!" compilations and the hit to miss ratio is actually pretty good. And there's nowt wrong with a bit of disco, whatever I might have thought back in the day when I was busy fighting the Punk Wars.

The highlight of this album for me is the wonderful Candi Staton's "Young Hearts Run Free", which I secretly liked when it was originally released, although I'd never have admitted that to anyone. 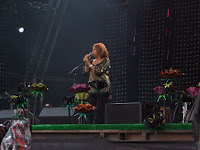 I saw Ms Staton at Glastonbury last year and she was ace. Me standing at the front grinning like a loon and singing along like a good 'un. I had a horrible feeling I was captured on film doing this, but luckily the BBC chose to spare the nation the sight of me, unwashed and hirsute, giving it large on the big screen.

I can't find any original clips of Candi doing 'Young Hearts', but here's her re-recording of the track back in 1999. Still a very fine version sung by a very classy, sassy lady.