Off to Goodison today, for my first home league game of the season - a season that has started disconcertingly poorly, with defeats to Arsenal and Burnley (Burnley! Bloody Hell...) and the grand total of nil points so far. Despite our success so far in Europe, back home we started the day propping up the rest of the Premiership.

So Wigan. Surely to God we would get something out of this one? Well, we did, but oh so nearly slipped up again.

A new look defence for Everton, with Sylvan Distin making his debut alongside Joseph Yobo. His introduction meant Phil Neville moving back into midfield, and Fellaini dropping to the bench, along with our other new signing Diniyar Bilyaletdinov (henceforth to be referred to as 'Billy'). Wigan lined up in a disconcertingly dayglo orange kit, and looked like a mean bunch of buggers. And so it proved, as they adopted a very physical approach to the game that knocked us out of our stride somewhat. We struggled to create chances, they didn't look interested in creating chances, and so nil-nil at half time was not really surprising.

After the break, we continued to press forward but to little real effect until, on the half hour, the inevitable happened and a Wigan break ended up with Scharner (again! He always scores against us!) bundling the ball in, unmarked, at the far post.

Happily the goal seemed to spur us on and we equalised shortly afterwards, although not before another scare when Wigan hit the post on another breakaway. Our goal came from a corner, Louis Saha heading home despite being surrounded by Wigan defenders. A fit Louis Saha will be a potent weapon for us this season, I'm sure - he's looking sharp and strong, although he did fade badly with around fifteen minutes to go.

At 1-1, we pressed harder and harder, going close on a number of occasions although again, we nearly got caught out on the break, when Wigan broke in numbers (7 vs 2!) after a succession of Everton corners. We kept pressing though, and got our reward in the third minute of injury time when Jo (on for Saha) was brought down in the box. Penalty! Up stepped Leighton Baines, against his old club, to score (just) and give us our first win of the season.

Deserved, if hard fought, and hopefully we can kick on from here. Distin settled in immediately and could be a great buy for us. Fellaini looked sharp and motivated when he came on, and Rodwell continues to improve at an exponential rate.

A few more signings before deadline day, and who knows?

In other news, the Grand Prix ended in tears very early on for both Button and Hamilton, both shunted off the track on the first lap. Kimi Raikkionen eventually won, with Giancarlo Fissichella's Force India in second place. None of Button's championship rivals were able to do too much to dent his lead in the Drivers' Championship, which he looks like winning more and more by default. 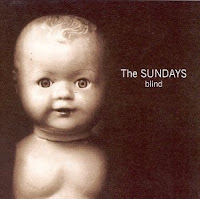 The Sundays on this Sunday's soundtrack, with 'Blind', their second album which, although ok, is not a patch on their marvellous debut, 'Reading, Writing and Arithmetic'. Never heard The Sundays? Imagine a cross between The Smiths and the Cocteau Twins, and you'll be reasonably close. Jangly Marr-esque guitars courtesy of Dave Gavurin, dreamy female vocals from Harriet Wheeler (surely the only Harriet in rock?) and Morrissey-esque lyrics and song titles ('I Kicked a Boy', 'My Finest Hour', 'Here's Where the Story Ends').

This track is a bit of a departure for the band, being a cover, but it's such a good version you deserve to hear it. It's the Sones' 'Wild Horses' and it's beautiful.