This football management lark is in severe danger of taking over my life. I knew it would - it's happened before (and no doubt it will happen again). The problem is that you need a good deal of time to get into a routine - something I've plenty of at the moment. It just doesn't work in fifteen minute spells, you need to be able to devote hours, nay days, of your time to the damn thing. 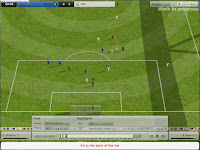 Which is what I did today, primarily. Still hanging in there, as we move into December, but half the team are now attracting the attention of bigger teams. Not sure why, as by and large they are playing like dogs, but somehow I'm in the quarter finals of the League Cup, where I'm about to be knocked out by Chelsea, it looks like I'll get through the group stages of the UEFA Cup (or whatever its called now) - following an excellent away draw at AC Milan (battered them for most of the game, took the lead, then conceded a raggy equaliser at the death). In fact, if it wasn't for some very ropey league form (languishing in 13th place at the moment) all would be fine. Perhaps I'll just let all these overpaid primadonnas go, and spend the money on a bunch of keen kids who actually want to play for me. Or not.

So that was my day, how was yours?

Actually, that's not quite true, I did do a couple of other things in and around my footballing activities. I finally caught up with my ex-boss regarding this job opportunity - as is often the case, we seem to have a number of agencies each claiming some degree of 'exclusivity' with the company offering the job, which kind of makes it difficult to know who you should really be dealing with. Probably best to have some contact with them all, making it clear who you have spoken to, and letting them deal with the conflicts. Anyway, details are going to be passed on - let's see where this one gets to!

Baked myself a seeded spelt loaf this week for lunchtime sandwiches, so headed off to the local farm shop for something nice to stick on top. Picked up some tasty pastrami, posh coleslaw, posh cheeses - and bacon and sausage for the weekend fry-up.

I also picked up some Eccles Cakes. And now I'm going to let you into a little secret. A secret recipe that will initially appal you, but which will delight and amaze you if you have the courage to try it out.

Take your Eccles Cakes (I would assume more than one would be necessary) and warm up using your favoured approach to warming said cakes. Probably the oven, but maybe under the grill or even in the microwave.

Cut yourself a big slice of Stilton Cheese and stick it on top of the Eccles Cake. Stick under a grill so the cheese melts.

Trust me - it's a taste sensation. How do I know this? Well there used to be (and for all I know, still is) a pub in Liverpool City Centre that served this on its lunchtime menu. I was in there with some fellow accountants, oh, probably twenty years ago now, and was persuaded to try the Eccles Cake/Cheese combo against, it has to be said, my better judgement. But I did, and it was lovely.

Try it and tell me I'm wrong. 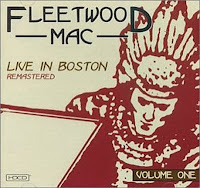 The Fleetwood Mac on the soundtrack today is not the stega-rich, cocaine-hoovering supergroup of the late '70s and early '80s - rather, it is the original band, fronted at the time by Peter Green, wonderful guitarist but eventual drug casualty. This is volume one of three CDs, recorded live in Boston in 1970. I think they are bootlegs, but may actually have had a semi-official release at some stage. Whatever, the sound quality is fantastic, as is the music and the guitar playing. This version of Fleetwood Mac is the one that released such wonderful tracks as Man of the World, Albatross and Black Magic Woman, and shows up the more contemporary version of the band for the easy listening borefest that they are. Extremely rich and self-satisfied borefest, but there you go.

Happily Peter Green, although still somewhat fragile, is a lot healthier than he has been, and does now perform on stage on an intermittent basis. Worth catching if you can.

This is Peter and the Mac in happier days - Man of the World, recorded live (vocals anyway, backing sounds like the original) for the BBC. Quite possibly the most beautiful, saddest song ever recorded.