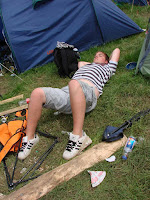 Perhaps bed would have been a better idea last night. I did get to bed, at some stage, when the autopilot kicked in...but when and how I have no idea.

The first job of the day was therefore to do something about the hangover. I adopted a six-stage approach to the task in hand (once I realised that quietly whimpering was not, of itself, going to do me any good).

Stage One: Rehydration salts begged off one of the boys. Taken with plenty of water. At least stopped my tongue sticking to the roof of my mouth. 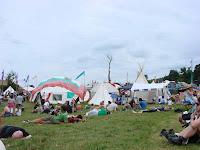 Stage Two: Juice. More precisely, a 'Detox' blend from one of the many juice stalls dotted around the site. Comprising carrot, beetroot, celery and apple, juiced and blended to order. Better.

Stage Three: The Orange Refresher Ice Lolly. Not a recognised hangover cure I know, but it numbed my aching tongue and got some sugar into my system.

Stage Four: Water. A litre and a half of Glastonbury Spring 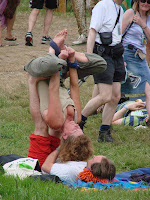 Stage Five: The Healing Fields. A long walk from the campsite, and a chance for some peace and quiet. I sat up here for a while just chilling, taking in the peaceful vibe and watching the 'healers' massaging, chanting and meditating. A nice Hare Krishna man gave me a piece of fruit 'for meditation'. Not knowing how to meditate with fruit, I ate it instead.

Stage Six: Curry. A Goan Fish Curry to be precise, something of a Glastonbury tradition.

And in the end dear readers, I beat the hangover. But remember - it's not big and it's not clever.

I enjoyed most of today's music from a distance, sitting up at the campsite before and after my wander to the Healing Fields. First up were Easy Star All-Stars, performing most of their dub version of Sgt Peppers, and very good it was too.

Next up were Status Quo, in the early Sunday slot filled by Shakey last year. They didn't disappoint either - all the hits, lots of boogie, no more than three chords per song. What's not to like? 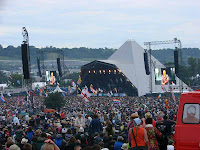 Got back from my wanderings just in time for Tom Jones. Traditionally now, the mid-afternoon Sunday slot goes to someone who has, shall we say, been around a bit. Shirley Bassey, Neil Diamond and - this year - Jones the Voice. We got all the hits - Delilah, It's Not Unusual, What's New Pussycat, The Green Green Grass of Home - as well as some of his newer stuff - Sexbomb and Kiss included. The boyo's still got it!

Next up - Madness. And again, they judged the festival audience perfectly. All the hits, lots of cheery banter, note-perfect throughout. The crowd (and I) loved them to death. the Son still hates them with a passion, though.

I spent most of the day undecided about how to finish my Sunday. I'd spent the last two days at the Pyramid for the headliners and really didn't want to make it three out of three, although Blur were an attractive proposition. also, I was not too worried about missing some or all of Nick Cave, as I'll be seeing him in a few weeks at Latitude.

In the end I decided to head over to the Acoustic tent to see the final two bands there. I fancied a low-key end to the festival, with some real quality. And that's what I got. 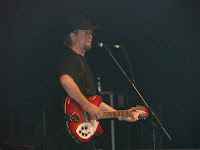 Firstly, Roger McGuinn. The former Byrds leader played totally solo, playing Rickenbacker electric (natch) and his own 7-string acoustic. A delightful set, with some long, rambling introductions describing how the songs came about, and the genesis of the Byrds sound as 'Beatled-up folk music'. A lovely man, who responded to the genuine and warm applause from the audience with a series of 'peace' signs. Bless. 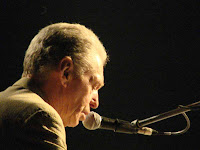 And finally, Georgie Fame and the Blue Flames. Georgie is also an excellent (if slightly grumpier) raconteur, and he still knows his way round a Hammond. Tight little band, nice blend of jazz and blues, an hour and a quarter flew by in his company. In one of the biggest festivals in the world, this break in one of its most intimate corners was a welcome rest from the full-onness and hurly-burly going on elsewhere.

Back in the wider festival, Blur had gone down a storm - as had The Prodigy over on the other stage - and the Pyramid Field was now a kaleidoscope of fire and flares as people wound down (or wound up) for the final night. 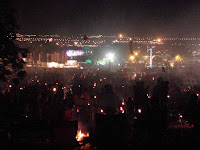 Back at camp, I resisted the temptation to go up to the Stone Circle or over to Trash City - and I'm glad I did, as within an hour the heavens opened, the thunder and lightning crashed and flashed and the festival gods took their revenge. Suitably chastened, I retreated to my tent and turned out the light.
Posted by Paul Waring at 2:23 pm