Woke up to hear, sadly, of a few tent robberies in our vicinity although, thankfully, none of them affecting our little party. It helps, I think, camping as a largish group, with plenty of us coming and going all the time - and, of course, by taking sensible precautions - all my valuables (which basically means wallet, keys, phone and camera) stay with me in the sleeping bag at night, and travel with me during the day. 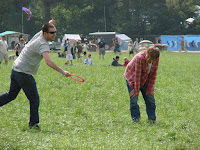 Wolfed down a couple of cereal bars and then some of the boys headed off to the Pyramid Field for a touch of Frisbee. I went along for the ride and managed to avoid too much diving around, opting for the role of Official Chronicler of the event (all right, I sat down and took a few photos).

Back at the campsite, got a text from an old school mate of mine. I'd not seen Trefor for around 30 years, but here he was, attending his first Glastonbury at the age of *cough* and up for a meet. 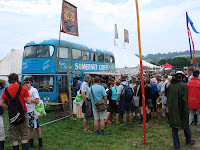 And where else to meet but the Cider Bus? Another Glastonbury institution, the Cider Bus is famous for its apple cider, in both cold and 'hot and spicy' versions. And mighty fine it is too! So a couple of pints and a hearty reminisce with Trefor (And hasn't he grown? Upwards, I mean, not outwards - although there's a bit of that too if I'm honest). Really nice to meet him - not seen the lad for thirty years and we get straight back into the banter and conversation as though it was just the other week. It helps that I've not changed a bit, of course.

Left Trefor with his wife and mates and off to meet up with Sarah and Gareth. Sarah and I used to work together and this was also her first Glastonbury, so I'd agreed to show them round. Owing to the vagaries of the site's mobile coverage, it took a while to make contact, but when we did, she suggested a good place to meet up.

And where else to meet but the Cider Bus? 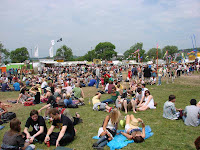 So a few pints later, we did a mini-tour of the top end of the site, back to our campsite, round the main stages and the Dance Village, and finished up in Jazz World, where we needed to buy yet more comedy sunglasses. Sarah and Gareth then headed off to get ready for East 17 and I think I went back to the campsite.

Whilst thing were beginning to pick up on the entertainment front today, there was nothing that really pulled at us so we hung around the campsite for the most part this evening, although some of the more active team members went off to the Dance Village or up to the Stone Circle. Truth be known, the pace was beginning to tell and somehow I'd managed to go another 24 hours eating nothing but a handful of peanuts and a couple of cereal bars. So feeling rather sorry for myself I sloped off to bed early.

Memo to self: EAT SOMETHING!
Posted by Paul Waring at 11:32 am