Today's soundtrack: AC/DC - If You Want Blood, You've Got It

I know, I know, there've been rather a lot of combined days' postings going on recently. So much for a single post every day, what happened to that? Well let me tell you, it's not easy coming up with fresh stuff to write every single day - especially when one day is much like any other at the moment!

But I know I'm slipping - when I get Latitude out of the way, I promise to do better.

So Jayne won Masterchef then, as we thought she might. I won't give you a blow-by-blow, it's been done better than I could by Andrew Collins here - but once she'd got away from the pressure of the professional kitchen she managed to cook something that looked (and, presumably, tasted) better than anything the others could produce. Roll on Normal Person Masterchef! 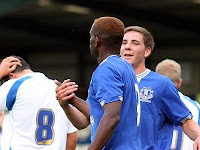 While all that was going on, the footy pre-season started with Everton's first friendly, away to the mighty Bury. Everton's back four included three kids I'd quite literally never heard of, and while the rest of the team had some pedigree, it was no real surprise that they lost 2-1 in the end. Nice to see Jo back for a season-long loan, but that's not really where I think our priority lies for strengthening this season.

In other sporting news, England managed the raggedy-est draw possible in the first test after looking dead and buried at the start of the final day. Not really a huge cause for celebration, we looked (and were) crap for most of the match and it is difficult to see where any improvement may come from. I remain distinctly underwhelmed by cricket as a spectator sport these days - years ago I would have watched test matches from first ball to last

but now I just can't maintain the enthusiasm. I did sit through the German Grand Prix though - it does begin to look like a Red Bull charge in the second half of the season will make things pretty interesting as Brawn go slightly off the boil. And whilst it was nice to see a competitive Lewis Hamilton come through qualifying in some style, it was disappointing (although massively amusing) to see him set off like a loon and blow (quite literally) his chances at the very first corner. Still, good to see Mark Webber winning his first race (from his first pole) - seems like a nice guy who, like Button, is long overdue some tangible success.

I spent a lot of the weekend trawling the Internet for snide downloads of Glastonbury performances, and hit paydirt with some decent recordings of Neil Young, Bruce Springsteen and The Gaslight Anthem. I even managed to find a video of the Springsteen guest spot with The Anthem (although I was unable to spot myself in the crowd). Converting them into iPod-friendly formats (and getting the right titles for the songs) took a bit of effort but we got there in the end. I also picked up The Sunday Times for the free Specials CD, which is also sitting proudly on the iPod now.

Culinary treat of the weekend was one of the simplest - toasted bagels with cream cheese. We don't have bagels that often, and I'd forgotten just how much I enjoyed them. With some smoked salmon and a twist of black pepper, they'd have been even better. Next time.

The bagels were almost outshone by Saturday brunch though - just the thing to cure the marginally thick head I'd woken up with on Saturday morning. Between myself and Mrs W, brunch comprised the following:
Cumberland sausage x4 (healthily grilled in the Formby)
Back bacon x4 (cooked in the frying pan)
Black pudding x2 (cooked in the bacon fat)
Mushrooms (ditto)
Fried egg x4 (ditto)
Fried bread x2 (cooked in the juices saved from the sausages)
Plus brown sauce for me and red sauce for Mrs W.
Now if only we'd had some beans and hash browns in... Finally a bit of heavy stuff on the soundtrack. And it doesn't get much better than Bon Scott era AC/DC, does it? If You Want Blood... also has the advantage of being live, and includes the wonderful 'Whole Lotta Rosie', about one of Mr Scott's more, ahem, Rubenesque groupies. 42-39-56, you could say she's got it all!! Hell yeah!

And here they are in Colchester, of all places, back in 1978. Rifftastic!