Today's soundtrack: Bloc Party - A Weekend in the City

Mrs W is back at work this week, after a well-deserved week off, so it's back to just me and the cat at home in the daytime. So I let him have the run of the garden and cleared off to see the parents (and, of course, to get a free lunch out of them. They say there is no such thing as a free lunch. There is, of course. When you go round to your Mum and Dad's).

I normally go round to my parents at the weekend. Except that most of the time the arl fella is out, watching my nephew play football. So I thought if I went round on a Monday, he'd be in.

He was out, of course.

Although he hadn't gone far - just out visiting his sister and fetching the dog from my brothers. It was nice to have a couple of hours with my Mum and Dad, showing off the Glastonbury pictures and listening them bicker like and old married couple. Which of course they are.

Back home then, to let Pedro back in after his morning wanderings. After what happened to Katy Teabag, I am still nervous about leaving him out alone for any length of time, but he scampered happily up to the back door without a care in the world. Still no evidence of him seeking to go anywhere near the front door - on the only occasion he did step out at the front of the house, he couldn't get back inside quickly enough. And long may that continue!

Finally coming out of my Glastonbury torpor, it was time to get on with some housework. That meant the ironing, which - true to form - I had allowed to build up over a couple of weeks to the extent that it was getting a touch difficult to close the airing cupboard door. So a couple of hours spent battling through a huge pile of t-shirts and sweaters. I hate ironing t-shirts - they generally end up with more creases than they started with - but eventually the 'ironed' pile grew higher than the 'creased' pile. Time to stop, saving the pile of shirts and trousers for tomorrow. Now shirts I don't mind - there are seams and stuff to follow in a particular order, and they are generally not made of stretchy stuff either. And trousers are ok, until it comes to the crease needed in 'proper' kecks which is safest left to the trouser press in all honesty. 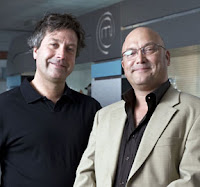 Light tea tonight, enjoyed in front of 'Celebrity Masterchef' - possibly the only programme that I watch with the word 'celebrity' in the title. Anyway I don't care - I love it. As a bit of an amateur cook myself, I'm fascinated by the series - the recipes they choose to cook, the pressures they are put under in professional kitchens. I'd be crap at it - the one thing I cannot do is cook to a deadline and an hour (or whatever they are given) would never be enough for me. Also, I can't be doing with the presentational aspects of 'professional' cookery - I want to eat it and taste it, not look at it!

All good fun though. Reckon Cilla off of Corrie is favourite, although Mrs W thinks that Jayne Middlemiss might just sneak it - and she might be right as well. 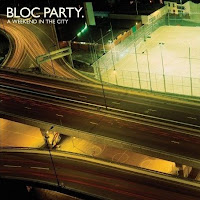 Bloc Party make it onto the soundtrack today. Now I like Bloc Party, but I wouldn't miss them if they'd never existed, if that makes sense, and I've always found somewhere better to be when they've been on festival bills. So not an essential group by any means, but they are more than ok in my book. A Weekend in the City is their second album, and was pretty well received when it came out. Again, I probably wouldn't actively seek it out to listen to, but I do enjoy it when it comes up on shuffle.

Sorry lads, damned with faint praise there. Anyway, here's 'Hunting For Witches', one of the singles from the album: