Today's soundtrack: Nick Cave and the Bad Seeds - 'B' Sides and Rarities

Up early today, to load the car with festival stuff and get on the road to Portsmouth. Today is Son No 1's graduation, in Portsmouth Guildhall, and I need to get down there in good order, to park up and meet up with him and my first (and ex) wife before the ceremony starts.

The journey got off to a bad start, as I got to my usual M6 junction to find the road leading to the motorway was closed. Now satnav is a wonderful thing, but entirely useless in this situation. I drove off to find a route to the next junction down, but all the satnav wanted to do was swing me round in a big loop back to the junction I couldn't use! I suppose if I'd stopped the car and reprogrammed the satnav to avoid said junction I'd have been fine - but no, I thought, how difficult can this be? Very bloody difficult, was the answer. Eventually I retraced my steps and joined the M6 at the junction north of my usual point, having added a good half hour to my journey in the process. Luckily my innate paranoia of being late had added sufficient cushion for this not necessarily to be a problem. 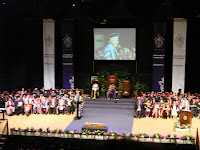 And so it proved, as without further incident I got down to Portsmouth in plenty of time to meet up in front of the Guildhall. I'd been a bit worried about meeting up, and spending a large proportion of the day, with my ex-wife - but I needn't have worried as after a slightly stilted and nervous few minutes it was fine and we ended up having quite a nice conversation about this and that, catching up on respective families and such. It's nice to have reached the point where we can do that.

But anyway, the day wasn't about us, it was about our son, resplendent in suit, tie, gown and mortar board. After taking a few pictures outside and battling with the swirling wind, we left him to find his seat and we made our way up to the circle for the ceremony itself.

Someone once described war as 'hours of boredom and moments of terror'. Substitute 'pride' for 'terror' and you could be describing the average graduation ceremony. Seeing your firstborn son walk onto the stage in his gown, to be awarded his degree, is surely one of the proudest moments a parent can experience. Unfortunately the experience lasts, at most, 30 seconds. Seeing a thousand or so other kids doing the same walk across the stage becomes, unfortunately, mind-numbingly tedious in a very short space of time. In an overheated building, with little ventilation, also becomes very uncomfortable as well. 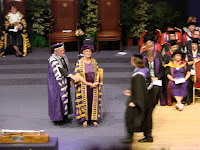 All that said, I wouldn't have missed it for the world and at the risk of repeating myself, I was (and remain) incredibly proud of my son - he's worked hard to get a very good degree and was very deserving of his moment in the spotlight.

So after the ceremony, the photographs and the gown return, we went our separate ways - which in my case, was to a hotel in Southampton - staying down in advance of the drive across to Southwold the following day. I'd arranged to meet up with some old colleagues in the evening, who picked me up from the hotel and whisked me off to the pub for beers, followed by a

curry at Poppadom Express (which I can heartily recommend). A nice few hours putting the world to rights, particularly in the context of Simon's impending 'resignation'. It's a difficult time for the Southampton team, but they are a good team and are being left in safe hands and, with the right degree of local support, they should still prosper. Doesn't make Simon's treatment right, though.

Aaanyway. Back to the hotel for my last sleep in a bed for a few nights, before the long trek cross-country tomorrow (why is Southwold so far away from everywhere?)

Purely by coincidence, it's one of the Latitude headliners on the soundtrack today, from a collection of obscure/alternate tracks that is sprinkled with some absolute gems. The compilation includes a version of 'Red Right Hand' that the band did play at Latitude - but here's a clip of them performing the song at Glastonbury around ten years ago. A far more restrained version than the one we were treated to at Latitude!