Kept myself to myself this morning, as the girls slowly recovered from their night out last night.

Drove over to Huddersfield to pick up Son No 2 from his student house - we were off to see the temporarily-reformed Pele in Liverpool tonight at the Academy. I managed to find my way to his house without getting lost or caught out by one of Huddersfield's millions of speed cameras, and was pleased to see the house looking reasonably neat and tidy. For a student house, anyway. Naturally the sink was stacked with dirty dishes, but worksurfaces were still largely visible and there were only one or two old pans on the stove! Let's see what it looks like in a term or two's time!

We headed off to Liverpool in plenty of time, intending to have a bite to eat when we got there. After parking up by the academy, we wandered down to the food outlets in Liverpool One, where there was plenty to choose from - amongst hundreds of people with the same idea. What credit crunch?

After perusing the various menus, we settled upon the 'Gourmet Burger Kitchen', which was a new one on both of us. The restaurant works on the same principle as Nando's - ie you choose your food and order (and pay for) it yourself at the counter, after which it is served at your table. We had some little nibbly chicken bites to start, followed by a Cajun burger for The Boy and a Bacon/Avocado burger for yours truly, with portions of the nicest chips I've had in a restaurant for a goodly while. All very tasty, quick and relatively cheap - worth checking out if you can find one.

I did turn into my dad for a while though - when our drinks were served I had a real 'is that a boy or a girl?' moment with the server. Initially convinced it was a boy (hence my 'thanks mate' when my beer landed in front of me) I got flustered when I realised it just might be a girl....to be fair, I don't think Matt was sure either...

Suitably fuelled, we took the time to visit 'Everton 2' for just long enough to confirm that the new home kit is hopelessly, irredeemably, naff, before heading up to the Academy for doors at seven. We were just a touch too early, so stood outside the front cracking on to the roadie and saying hello to Ian Prowse, as he came up looking for the Chilean reporter who was there to interview him. Were Pele massive in Chile back in the day? Who knows?

First in when the doors opened (pathological fear of missing support acts instilled when staying too long in the pub in 1980, thus managing to miss my one and only chance of seeing Joy Division), we had a beer and sat, essentially, by ourselves in the bar until the first support came on - by which time there were probably about 16 of us in the club. So if this band make it big in years to come and everyone claims to have been at the early Liverpool gig - trust me, they weren't.

Not that that's likely to happen, although they were pretty good. Called The Verdict (a great name for a Liverpool band, if only for the way it sounds with a strong accent) they were a punchy three-piece with some tight songs that never outstayed their welcome. The inclusion of a few bars of 'Eton Rifles' mid-set gives some indication of their influences, although in fairness they were more punky than modish. Give them a listen here. 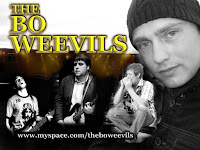 Next up were The Bo Weevils, another local band with a pretty good local following. It seems that tonight was originally meant to be 'their' gig, until the gig was combined with the Pele reunion, hence a fair few tickets had been sold directly to their fan base. So a good reception for the band, who delivered a shortish set notable for some remarkable guitar playing, harmonica and harmonised vocals. And for being bloody loud. I'd definitely give them another go, see what you think here. 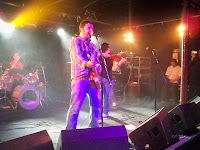 And so to the main event. This is, loosely, a twenty year reunion for Pele, comprising just two shows in Liverpool and London. Although dimly aware of the band at the time, they really came into focus through my obsession with Amsterdam, the band formed by Ian Prowse some years after Pele split up and who still incorporate a few Pele numbers in their set. But this was the real deal, the original five piece reunited and on stage together for the first time in years.

We'd taken up our usual speck in the Academy, on the barrier to the left of the stage, a great spot (although the bass speakers we are essentially leaning on can ripple your flares at times) to view the action. 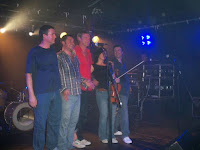 So could the group roll the years back and deliver? Oh yes, most definitely! Once used to seeing Prowsey on stage without his usual crew (and without the usual 'Intro'), it was a blast. Opening with 'Don't Worship Me, it was a ninety minute blast through the Pele songbook with all the hits (including South African number one, Megalomania) and a few less obvious selections. Highlights included a passionate Fat Black Heart, the audience participation through 'Fair Blows The Wind For France' and 'Fireworks', a gentle 'Policeman', and the explosion of joy and passion that is 'Raid The Palace'.

Here's the original video for 'Raid The Palace'. Happier, simpler times! Oh, and get your haircut, Prowsey!

Buzzcocks on the soundtrack to all this, another band that fit joy and passion into their songs with aplomb. Singles Going Steady is just that - a collection of all their early 'A' and 'B' sides on one disc. Quality control is stupendous, with not a bad song on the album. Here's a quick taster - punk really did not get any better than this: