Well, that's it, festival season over for another year, and in the words of Mrs W, I am SO grounded for the rest of the year! Which is fair enough really, I am given plenty of freedom to do the things I want to do (and that Mrs W wouldn't be seen dead doing) but I need to be careful I don't over-use (or abuse) that freedom.

So back to the daily grind. Which in the first instance meant catching up on emails, trawling the job sites and hopefully making some job applications. As it was, there were three particular opportunities that caught my eye today from three different sources - an email forwarded by an ex-colleague, a contact made via LinkedIn and an advert on exec-appointments. The applications have now been submitted for all three, all I can do now is wait and see if anything comes back.

For the rest of the day, I had a fair bit of catching up to do on this here blog, getting all my Latitude experiences recorded for posterity. Overall, it was a fine festival with a number of highlights that you've no doubt ploughed through in getting to this post. If I was to do anything differently, I should probably have cut down on revisiting the bands I'd already seen recently, and explored some more 'new' stuff. All I really did was confirm how good the bands I knew about were and, compared to last year, I made relatively few 'new' discoveries. But that said, I saw a lot of really good bands and finally got into the Comedy Tent and Guilty Pleasures tent, picked up a bit of 'culture' and enjoyed the company of some really nice people.

In other news, my season ticket for Everton has arrived - unfortunately, unaccompanied by a whole raft of new signings to 'take the team to the next level'. New season, same old Everton. At least Joleon hasn't gone - yet!

Fascinated by the Stevie G case, particularly after seeing the video evidence that seems to have found its way onto the internet. Can't understand why Stevie is the only one of the whole party who is, apparently, not guilty of any offence, when all of his mates have found it necessary to plead guilty. Particularly in the light of the video, which seems to show our hero landing three particularly tasty uppercuts - landed after the DJ had been incapacitated by Stevie's mate's elbow, which kind of dilutes any 'self defence' argument.

All that said, I fully expect Stevie to walk free a the conclusion of the trial - why else would he have pleaded not guilty? 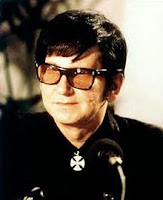 The Big O on the soundtrack today. King of Hearts is a posthumous album, released just after his death in 1988 at the age of 52 (only two years older than Michael Jackson, note!) sadly just as his career was going through a renaissance following his involvement with the Travelling Wilburys and the excellent 'Mystery Girl' album. From around this time also came the 'Black and White Night' show, when he revisited a raft of his greatest songs, supported by a stellar cast of superstars including Springsteen, Costello, Tom Waits, kd lang and many others. Well worth seeking out on DVD.

Inevitably, King of Hearts is a 'bitty' album, with some gems and a lot of filler, but it has the beautiful duet with kd lang on 'Crying', which is worth the price of admission alone.

But what a voice. Bruce Springsteen said of his song 'Thunder Road' that "I wanted a record with words like Bob Dylan that sounded like Phil Spector—but, most of all, I wanted to sing like Roy Orbison. Now everyone knows that no one sings like Roy Orbison."

And Bruce is right, too. Here's The Big O performing 'In Dreams' as part of the Black and White Night. Marvellous stuff.