Nice leisurely start to the day today, plenty of time to perform all necessary ablutions in a nice clean bathroom before entering the world of the wetwipe and the longdrop!

Firstly, a trip to the all-night chemist - no, don't get the wrong idea, I needed a compact mirror so I could negotiate my contact lenses over the next few days. I borrowed one of Mrs W's for Glastonbury, but had completely forgotten to re-borrow the mirror this time. Suitably supplied with a 99p mirror, it was off to Ocean Village for coffee and bacon butties with Simon - but more importantly to pick up his tent so I could secure his pitch - he was not arriving until the following day. 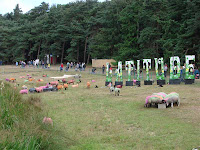 Finally got on the long (and winding) road to East Anglia around 10:30, and arrived on site uneventfully about four hours later. Parked up in the car park easily, and handily placed for the main entrance...along with thousands of other people who were patiently queueing up to get into the site. A change of policy this year meant the people picked up their wristbands on entry, rather than at their leisure at the 'Wristband Exchange' tent. Fine in theory, but in practice if you are going to do this on entry, you need enough staff on hand to deal with the massive influx as the gates open. Something Latitude dismally failed to do. It took me the best part of two hours to get onto the site - and for the people who were arriving behind me in that period, I dread to think how long it took them. Sort it out Latitude! Actually, the people in the queue were all incredibly relaxed about the delay - the weather was fine and the vibe was chilled, man. So not all bad.

Once on site, there are essentially two options. Pick a spot to camp close to the arena, to avoid long walks to and from the acts, or a spot close to the exits, to avoid long walks to and from the car. Since one involves a slim day pack containing camera and waterproofs, and the other a fully-laden sack trolley with all the weekend's kit, there is only one thing Paul was ever going to do. Luckily, there was a nice flat spot tucked up against the fence, next to a big sign marked 'Exit' - so that's where I headed. 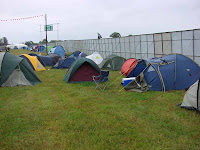 An hour or so later, both tents were up, the folding chair was unfolded, and the cider was poured. Time to introduce myself to the neighbours, who coincidentally were from Southampton (albeit originally from Norwich) - Heather and Chris, who throughout the weekend were the perfect neighbours. As were Russell and John (from Ipswich, who pitched up the following day).

With nothing of interest happening on the Thursday night, I chose to 'nest' at the tent, watching the world go by. As the night drew in, Chris and Heather invited me over to their (palatial) tent where they had a little barbecue thing going where we sat happily eating and drinking....until the heavens opened in the early hours in a quite dramatic thunderstorm - lightning and allsorts!

Suitably chastened, we slunk off to bed, hoping for a dramatic change in the weather!
Posted by Paul Waring at 3:06 pm