Oh dear. Before you say anything, it's not mine. Honest. There are nearly four and a half thousand albums in my iTunes collection. Around 4,400 of these are mine. Probably less than 100 belong to Mrs W. This is one of those albums. But, in the spirit of taking things as they come, the soundtrack to Pretty Woman is what I have to listen to today whilst typing this blog.

It will be a short one today, I promise you. 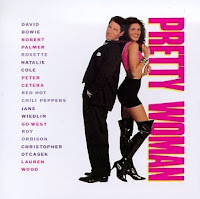 To be fair, as I peruse the tracklist, I can see Roy Orbison, the Red Hot Chilli Peppers, David Bowie and Robert Palmer. But then I can also see Roxette, Go West, Peter Cetera and Lauren Wood. And the unsettling image of Julia Roberts is hovering eerily at the back of my mind. What is it about Julia Roberts? I have severe doubts about her acting ability and find her singularly unattractive, yet she can apparently command higher fees per film than just about anyone out there. Is it all down to a big mouth and a set of shiny, even teeth? What am I missing?

Signing on day today, so off to Warrington for the fortnightly reminder of why I have to get a job sooner rather than later. Bit of a trial today, no fights to avoid, but for some reason they were heavily understaffed and those staff who were signing on us 'customers' also appeared to be training other staff - and taking twice as long as they normally would as a result. But after about a half hour wait, and being mildly patronised by a fourteen year old (possibly) member of the Job Centre team, I made good my escape.

At least things seem to be progressing with yesterday's headhunter - although holidays are holding back one of the opportunities, it looks like I might be getting an interview with the firm of accountants I mentioned yesterday. Will keep you all posted.

Took the opportunity today to clog up the new computer with all manner of games I had lying around today, so prepare to be regaled with stories of my attempts to manage Everton to a respectable position in the league soon. Whilst doing so, I found an old version of Microsoft Office that I managed to register and install. Spent a frustrating hour or two trying (and failing) to import my calendar details from Thunderbird into Outlook until I gave up and re-entered everything manually. I only bothered because my iPhone will only recognise, and sync with, the Outlook calendar. Still, I now have all my appointments (such as they are) in my iPhone, which should be convenient. 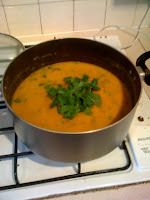 Mrs W is currently enjoying the renewed vigour that comes with recent gym membership, and translating that into a desire for healthy food in the evening rather than a plate of stodge and a bottle of wine. As a result, we had one of my Carrot and Coriander soups for tea tonight (recipe here) - but accompanied by some home-made Foccacia. This basically uses the pizza dough recipe I've been using for the home made pizzas I've been raving about here, but this time rolled and shaped into a rectangle, and sprinkled with garlic, sun-dried tomatoes, olives, olive oil, and rock salt and crushed peppercorns.

I'd show you a picture but it didn't last long enough. Very yummy, but the rock salt did give us both a raging thirst which, to our credit, was not slaked with a liter of sauvignon.

Right, I might have to listen to some old squit today, but I'm not going to impose the same rubbish on you. Instead, have some of this - it's the video for 'Just a Day' by Feeder and is possibly the most joyous thing on YouTube. Pulled together using footage of fans miming in their bedroom to the track, it cracks me up every time. Check out the two Japanese lads about thirty seconds in!

I suspect that (hopefully) I will never see again a BluePaul last fm recently played track list that includes Roxette and Go West! A bit of a shocker that one Paul!

Although hidden in the 1,600+ CDs in the newly installed shiny steel Day CD racks is the very same CD owned by Mrs D. I have to say that I have never played it although I did take Mrs D to see Go West a couple of years ago at the Anvil in Basingstoke. To give them a fair hearing they were a good white soul band live and were very funny in the chats between songs as well. Still wouldn't play the soundtrack though!!!

Much better to finish with Feeder on the blog....

Ahem, the Pretty Woman CD is not mine!! Love Mrs W

Well it's surely not mine....is it? I seem to recall buying it for you, because there was one particular track you wanted? Perhaps the Lauren Wood or the Jane Weidlin one?

First it was the seats at Latitude, then Roxette & romcom soundtracks ... what shock relevations will be next on the blog .... Spice Girl boxsets, tickets to see Girls Aloud, a past as a founding member of the Bros/Wham fan clubs???