Today's highlight: Neil Young (amongst many others)

Heavy thunderstorms in the night and early Friday had managed to turn the site into a mini-quagmire. Why is it that every Thursday night at Glastonbury it rains, just as the fun is really about to start?

No matter, that's why you bring wellies and waterproofs. In any event, I had something to do this morning - I had to eat.

Didn't feel like it much, but needs must. So off into the marketplace to find something suitable. Chanced upon a crepe stall and opted for the cheese and ham crepe, which actually went down a treat, especially when chased down with a fresh orange juice.

With protein and vitamin levels suitably enhanced, it was back to the campsite to do a bit of planning. Truth be known, there wasn't a lot I was desperate to see today, the the plan was pretty much to go with the flow until Neil Young came on in the evening, incorporating some intriguingly anonymous 'special guests' up at the Park. 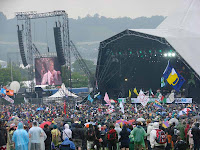 So sat round the campsite listening to Bjorn Again open proceedings on the Pyramid. Cheesy, but pretty accurate, Abba copyists got people dancing and generally put a smile on faces, despite the weather. Then I headed off on a roundabout route that found me at the Jazz World stage, just as Speed Caravan were being announced. A new band on me, French-Algerians performing with (the world's only?) electric oud, I was intrigued enough to give them a listen. 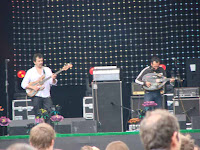 And I was glad I did. The sounds the oud player was able to get from his instrument put me more in mind of Jimmy Page than anyone else, and the parallels with the Page/Plant experiments with African sounds were pretty strong to my mind. They got better and better, whipping up a great deal of audience enthusiasm as they went. Unfortunately their set was concluded abruptly - maybe a power cut, although I suspect the plug was deliberately pulled as they were overrunning a fair bit. A shame, but the first excellent band of the Festival and a classic case of chancing across something wholly unexpected and completely wonderful. Happens every year at some stage and makes the festival what it is for me. 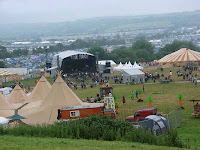 Left the Jazz World stage and slowly wandered up to The Park and settled down on the hill behind the Park tower. The views of the site are excellent from here, and I was happy just to sit and chill for a while, taking in the views and the sounds from the main stage. As the weather slowly improved, I took in the soul stylings of James Hunter - another new name on me, playing a deliberately retro blend of soul and r'n'b that was extremely pleasant if a little unchallenging. 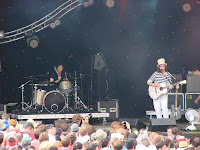 I then wandered down towards the Park Stage and took up a position by the mixing desk for the first of the day's special guests. Some overenthusiastic punters had been talking about Muse and Coldplay - totally unrealistic for this stage - and it turned out to be a newish band (duo, actually) called Hot Rats, who played a really entertaining set of cover versions taking in everything from David Bowie, the Beastie Boys, The Doors and Gang of Four. Part way through the set, it slowly dawned on me that Hot Rats were, in fact, Gaz Coombes and Danny Goffey from Supergrass, revisiting their roots and influences. 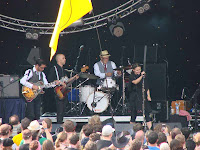 My original plan was to then head down to the Other Stage to see White Lies, then head back to The Park to see the second of the day's special guests. But given that a) I had a cracking speck where I was, and b) I couldn't be arsed with the treck, I stayed where I was. As a result I caught the set by Emiliana Torrini, who is (obviously) Icelandic (albeit of Italian descent) and someone else I'd never come across before. Clearly a very talented singer, with a tight backing band, she delivered a high quality set that was perhaps a little too polite for my tastes, but didn't make me regret hanging around. 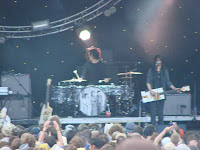 And so to the second of the two 'special guests', who turned out to be Jack White's latest side project, Dead Weather. This was a source of great excitement to Son No 2 - and also to me, to be fair. Jack (literally) takes more of a back seat with this band, playing drums pretty well throughout, although he reverted to guitar for the last couple of songs. He also passes most vocal duties to Alison Mosshart, whose day job is in The Kills. And what an excellent racket they make! Jack White is clearly as good a drummer as he is a guitarist and Dead Weather are at least as entertaining a proposition as The White Stripes or The Raconteurs. How refreshing it is to see someone who just wants to create, as often as he can with as many different collaborators as he can, and who in doing so can maintain such a consistently high standard of output?

Oh, and the day capped by Guy Garvey walking past me with a couple of ciders in his hand. Nice one Guy! 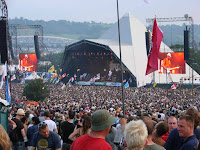 Big smile welded in place, it was back down to the campsite, where I caught the back end of The Specials set. I was a bit cynical about the reformation, which excluded Jerry Dammers, the Group's driving force, but any cynicism was blown away by the quality of the set and the enthusiasm of a packed Pyramid field. 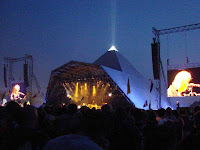 Which left Neil Young. Been a fan of Neil's for many years, but had never seen him live. We hoped for a grungey set rather than a folky one, and the old grumpmeister didn't disappoint. He paced his set perfectly, opening with a noisy and tight 'Hey Hey, My My' which delighted The Son no end. Other highlights included a heartfelt 'Needle and the Damage Done', 'Heart of Gold' and a version of 'Down By The River' that seemed to go on for hours. 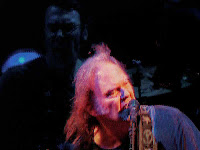 He closed with a suitably rocking 'Rockin' in the Free World', with five (count 'em!) false endings. Where could he go from there? Well, to a sublime encore of 'A Day in the Life' (identified as a Bowie song by the young lad stood in front of me) that ended with five of the six strings on Old Black snapped amid a squall of feedback.

So back to the campsite for a well-earned rest and a couple of looong gin 'n' tonics to relax before Saturday's exertions.
Posted by Paul Waring at 12:13 pm