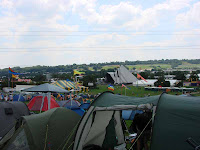 Early start this morning, on the road by half five in a desperate attempt to beat the rush onto site, and to ensure we got our customary pitch in Hawkswell, north of the Pyramid Stage. Traffic reasonably light on the way down, until I reached the outskirts of Bristol when a major incident on the M4 necessitated a wide diversion on my way to Wells.

Got to Wells around nine-thirty, then stopped off to pick up Son No 2, and Tim and Hannah, two of his mates who were camping with us. Off then, with a completely stacked out car, to Pilton (via Tesco's, to pick up the final few cans of lager necessary to keep the boys fuelled).

Traffic onto the site was heavier this year than last, and it took a while to get onto the car park, a touch further away from the main gate than we would have liked. A walk that proved to be too much for Tim's collapsible wheelbarrow, that took its description all too literally on the way to the front gate. 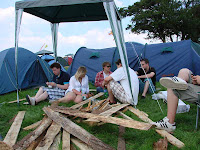 In true Glastonbury spirit, The Boy and I left Tim and Hannah to flounder and headed onto the site. Wristbanded and laden with cloth bags, guides and programmes, we got round to the site and pitched up alongside our other companions for the week - Oz, Billy, Rhys, Jo, Nell and Rose. Got the tents up, got the chairs out and then - aaah, the first cider of the weekend! Bliss!

Tim and Hannah finally joined us and, pitched, tented and gazebo'd, our little 10-strong village was ready to party. 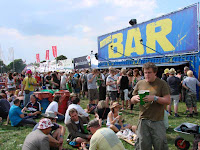 With all the action really kicking off on Friday, the first two days of the festival are all about exploration, re-visiting old favourite sites and, not to put too fine a point on it, drinking. So in an attempt to combine all three activities into one, we headed off to the Brothers Bar in the Jazz field. The Brothers Bar is one of two key cider-drinking sites (more on the other tomorrow) and is famous mainly for its 'Festival Strength' (7%) pear cider which comes in three flavours - pear, lemon and strawberry. 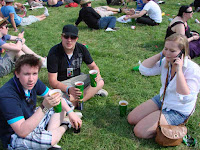 Now whilst the pear and lemon ciders are truly fine drinks, the strawberry cider is something else completely. Possibly the original alco-pop, it slips down a treat and, sat in the sun on the grass, has little apparent effect on the senses. And then you try to stand up. 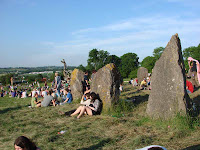 Suitably lubricated, it was time to fritter some cash away on festival jewellery and scarves, and comedy sunglasses. As you do. And then, after stocking up on fluids at the campsite, it was off to the Stone Circle to watch the sun go down over the site. Met up with a few more people at the circle, chilled and drank a bit more, then as twilight approached, we wandered back to the campsite, 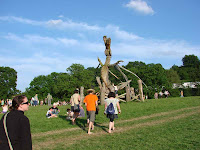 chatting to friends and strangers alike as we went.

Back at the campsite for a few sundowners, a bit of chat and eventually to bed. Early night tonight - must have been around one-thirty when we hit the sack!