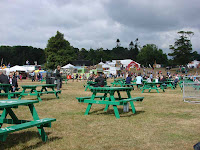 Relaxed start to the day today, hanging round the tents until the Arena opened at around ten. After wandering around the Village we made our way into the Arena and had a quick coffee, sitting at one of the many picnic tables dotted around. Decided we ought to eat, so invested in the festival staple, the Aussie Steak Sandwich - combo version. A freshly baked baguette, stuffed to the gunnels with steak, bacon, onion and cheese. Delicious, although naturally I managed to lose half of it in the eating - unwieldy rascal, the combo!

After lunch, we hung around the Lake Stage, where we saw The New York Fund and The Cheek. 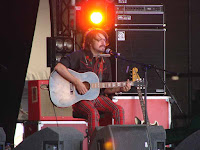 I'd seen The New York Fund last year, in a similar slot, and was very impressed by them. Essentially one Scottish bloke, supported by either his regular band (who seem to have a problem getting to Latitude) or, as in this case, his mate - who apparently had only learned the songs that morning (yeah, right). In any event, it was a good set of originals with a couple of interesting covers - good band, and I'd be made up if they gained a following. Find 'em on iTunes and MySpace - or below...check them out, they're good! 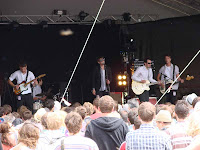 The Cheek used to be called 'Cheeky Cheeky and the Nosebleeds' and were being touted in some circles as the Next Big Thing. They weren't. So, regrouped and renamed, here they are near the bottom of the bill on one of the festival's smallest stages. Not difficult to understand why - indie by numbers with nothing to set them apart from a thousand other bands.

I believe Beer was taken at this stage. Specifically, a wicked brew called 'Scarecrow', recommended by our neighbours, and which slipped down a treat, on this and many more occasions over the weekend. Hic! 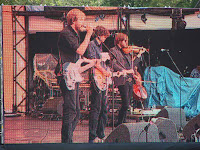 So off to the Obelisk, where we caught the tail end of Datarock (European electro-stuff in red hoodies). We then sat in the sun listening to Broken Records from Edinburgh, who we liked a lot - a bit Arcade Fire-y (in a good way). We then caught the beginning of The Airborne Toxic Event, about whom I'd heard good things but who were a bit, well, meh, I think the expression is. 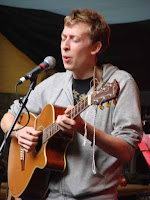 So we wandered off for an explore, which took us into the Woods and to the Sunrise Arena, where we saw some of the DM Stith set. My God, he is so sensitive! A lot of Buckley pere et fils (but mostly pere), a lot of eyes closed, acoustic guitar (of course) and a bloody cello! He made Nick Drake sound like Motorhead.

Needing something a bit more meaty to listen to, we went back to the Obelisk stage for 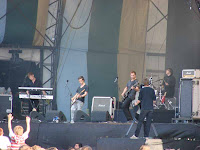 White Lies. Last year they opened the stage in front of about a hundred people, this year the stage was mobbed. They've come a long way in twelve months! Clearly influenced by Joy Division and Echo and the Bunnymen, they do use these influences well and are well worth the price of admission.

Oh, before White Lies, we inadvertently caught the tail end of Patrick Wolf's set. Oh my. Did I mention how camp Of Montreal were yesterday? Well Patrick showed me there are levels of campness that I did not know existed. He made Of Montreal look as camp as....actually no, just look at the picture. Actually, the music was not half bad, once you got past the image. He might just yet be the next big thing...

At this stage I have a confession to make. You know me as a hardened festival goer, forged in the mud of Glastonbury 2007, prepared for all weathers and every eventuality, no matter how extreme the elements or the conditions. Well, reader, today I weakened. You see dotted around the Obelisk Stage are a small number of shiny blue plastic seats, arranged in four mini-stands, if you will. And yes, we sat in the seats throughout Saturday evening. With the old people and the little children.

Simon made me do it. 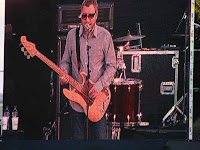 Anyway, Doves were up next. Saw them recently as well, as described here. Ace little band, a bit in the shadow of their good friends Elbow (who coincidentally had the same slot on Saturday last year) but with some great tunes and a stonking new album I have already pushed hard on the blog. Go out and buy it! They didn't disappoint either, a great set that was well-paced and full of little gems. The final two songs - The Cedar Room and There Goes The Fear - were as good as anything else we heard all weekend. 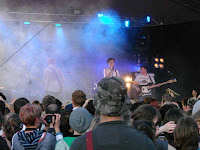 So decisions - should we hang around for Grace Jones or should we do something more interesting and worthwhile? The latter, obviously. Caught the tail end of Bombay Bicycle Club on the Lake Stage, who were ok in a jangly, slightly twee indie way. Whether they justify the hype they are currently getting - I'm not so sure.

Wandered across into the Cabaret area to see a rather strange production involving dome tents that I'm sure was hugely meaningful and significant. If it was, it went way over my head. Fun though. Then the rain came, just as we went to catch a bit of Grace Jones, who seemed to be doing as much costume changing as singing (or, in her case, talking). Underwhelmed, we left to drink beer. 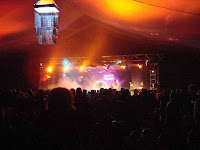 Finally we headed into the Guilty Pleasures tent, where an '80s Prom night was in progress. Hung around for an hour or so, soaking up the '80s vibe (Kevin, you'd have loved it) then back to the tent in anticipation of a quiet night. As it was, our neighbours had other ideas and we ended up sat around the fire chatting and drinking until about three.

So "Simon made me do it" .... must have been all that Scarecrow as I remember it as "Simon I will never live this down but do you fancy trying the seats for a while". Now I have to admit I didn't object and happily went along with it but I don't recall putting you in an arm lock and frog marching you to them. However the Scarecrow might have made me forget doing this!


PS you forgot that we also caught a song and a half of St Vincent which was rather weird, had far too many different kinds of instruments and the songs appeared to have no tunes at all! Yes probably best forgotten!!!