Family Stuff today, what with Son No 2 spending the day with us after last night's concert. While Mrs W headed off to the gym to help preserve her curves, The Boy and I headed across to Rock Ferry to see the ageing grandparents. As always, nice to spend some time with my Mum and Dad, listening to the banter and bickering that has sustained their marriage over the last fifty-odd years. And, of course, to get fed and to pick up on the family gossip. One of my aunts has been spending the last few days in hospital with breathing difficulties, possibly brought about by living an an old, damp, smoky house surrounded by an ever-changing menagerie of cats and dogs. No surprise, perhaps, that her difficulties have eased significantly while she has been in hospital - the only concern is that the difficulties will return when she goes back home...in the full knowledge that if the above factors are indeed relevant to her breathlessness, she'd prefer to be breathless than to remove the source(s) of the problem! I'd probably do exactly the same in her situation though, so who am I to talk?

Read through some schoolbook and reports produced by my nephew and niece while we were there...my, they are good! In particular, my nephew (currently 10) had produced a piece of work (describing an Indian wedding) that I could never have produced at his age (or, to be honest, when I was much older). There's a lot of talk about declining educational standards compared to 'my day' - well, I'm not seeing it on the evidence of the two younger Warings!

Back home, via Tesco's, as we needed to pick up a few 'essentials' for the evening - with The Boy stopping over, our original planned tea was never going to be sufficient so we needed some tacos to bulk out the night's offering - eaten in front of a typically average weekend DVD (Vacancy 2, if you must. Motel room used for peeping-tommery and general slaughter and mayhem. Characters 'offed' in routine order and the bad man lives to justify the sequel).

Early night, leaving Son No 2 in charge of ransacking my music collection and utilising my downloading capacity to his heart's content. 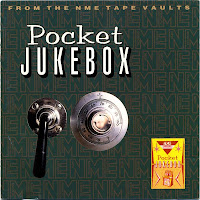 Pocket Jukebox was one of a number of cassettes released by the NME back in the '80s. Long before the days when free CDs were attached to music magazines as a matter of course (long before CDs, come to that) the NME used to have occasional offers for the readership to buy compilation cassettes. I seem to recall vouchers needed to be collected as well. Most were collections of contemporary recordings, but Pocket Jukebox was issued in conjunction with - I think - the Charly record label and included a raft of old soul and blues classics from the likes of Nina Simone, Robert Parker, Lee Dorsey and others. Unlike most of the NME cassettes, Pocket Jukebox was later released in extended form on CD, which is what I am listening to at the moment. The quality o material is consistently high and introduced me to a lot of stuff I'd have struggled to come across ordinarily. As such, if you can find a copy, it's well worth the investment...although you might struggle - I can't find a copy available on either Amazon or eBay at the moment.

And you're not having mine!

One of the less well known songs on the album is George Perkins' 'Cryin' in the Streets'. Here is the inevitable YouTube clip, with some especially poignant images that sit perfectly with the song. Enjoy.