With all the entertainment over, all that remained was to get off site as quickly and painlessly as possible. Having dismissed the idea of leaving after the last act, the only other serious option was to get away at first light - ie before 6 o'clock.

So it was that I started packing at 4am, a process helped by the still-noisy campsite as last night parties continued into the early hours. We were both fully packed with tents folded and stashed before six, and made our way to the exits, along with a few other hardy souls with the same idea.

And what a good idea it was, as I was straight out of the gates and on the road without another car in sight. Putting my trust in the satnav, I picked my way round some small country roads before picking up the main A14 via Cambridge to Coventry, onto the M6 and then home, by a hugely respectable 10am.

On a roll, I then spent the morning drying the tent (sodden with early morning condensation), unpacking and washing both clothes and myself, and generally getting myself out of festival mode and - reluctantly - into unemployed accountant mode once again.

And also into cook mode. I thought I'd treat Mrs W to one of my specialities, a big fat lasagne. I enjoy a lasagne, but it takes a lot of cooking, but what the hell, I'd got all day! Dashed out to pick up some onions, spinach and mushrooms - and a nice bottle of red - and got to work. 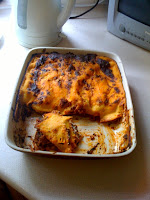 Firstly, I fried off some onions with some decent bacon that was lurking in the fridge (ideally I'd use pancetta, but Mrs W is not a fan) then added a pound of good butcher's mince, about three quarters of a large carrot (diced), the mushrooms and some garlic. When nicely cooked, I added some mixed herbs, basil and oregano, some tomato puree and a tin of chopped tomatoes. Just to make sure there was sufficient tomatoey goodness in the dish, I then added the best part of a jar of passata that was lurking in the fridge. When this was bubbling away nicely, I added the bag of spinach which, as spinach is wont to do, gradually disappeared into the sauce.

Plenty of time for this to cook gently, so I set it to a low simmer for an hour or so, allowing the meat to tenderise, the flavours to mingle and the sauce to reduce. You really want quite a dry sauce for a lasagne - with enough moisture to cook the pasta but not enough to make the dish sloppy.

When the meat was just about ready, it was on with the cheese sauce. A roux of around 50g of butter combined with a similar quantity of plain flour, cooked until it begins to brown but before it burns. Add around a pint of milk in batches, stirring as you go to ensure lumps don't form, until you have a reasonably firm sauce, to which you should add a decent handful or two of cheese of your choice (think we were on Red Leicester today).

Serve with garlic bread and plenty of ground black pepper and fresh grated parmesan. Oh, and that bottle of red wine you bought for the occasion.