So I'm dicking around on the internet, when a message pops up from Son No.2, asking me to come up with - no cheating, now - song titles for each day of the week. Piece of piss, I thought.

Manic Monday;
Ruby Tuesday;
Wednesday Week,
Thursday.....err...let's come back to that one;
Friday On My Mind;
Saturday's Kids;
Gloomy Sunday.

Eventually I had to cheat. The only two songs I've got in my collection with 'Thursday' in the title are amongst the most obscure - 'Thursday' by The Fatima Mansions, and 'Thursday Night Drinking Song' by Alun Parry. All the other days of the week - no problem, although to be fair, Tuesday and Wednesday aren't particularly well served.

It's all to do with the weekly cycle, I suppose. Friday and Saturday - all about anticipation, or enjoyment, of the weekend. Sunday - weekend's over, back to work. Monday - bugger, I'm back at work (or school) and I don't like it. In that context, what is there to write about regarding the midweek period? Precious little, I suppose. Unless you're Craig David, of course, who had a more interesting weekly pattern than most of us.

So....any good Thursday songs out there? Answers on a postcard, please. Or put them in the 'comments' section below. Less faffing about.

Given that my current weekly cycle doesn't follow the norm at the moment, what did I get up to on this (not so) fine Thursday then? Well, reader, I did handyman stuff! One of those jobs I've been putting off for ages, but which had to be done as we have a house guest this evening. One of the pieces of coving in the spare bedroom had fallen down a while ago and has been sitting, accusingly, on top of the curtains (well, that boxy thing that sits over the top of the curtains, anyway - what are they called? Answers on a postcard etc) waiting for me to do something about it. Like stick the thing back up.

What's the point of coving anyway? Why do we need curvy bits of...wood? plaster? MDF? snaking round the wall/ceiling interface? It's fine if it just sits there, minding its own business, but when it falls off, it gives me work to do that I wouldn't otherwise have!

Anyway. A while ago, my dad had given me a bag of grey powder which, when mixed with water, turns into a sloppy paste designed especially for the sticking of coving to the wall/ceiling. So we mixed it up, allowed it to 'settle', slapped globs onto the edge of the coving and held the (heavier than it looks) coving into place. And, wonder of wonders, it stayed there! (and is still there, at the time of writing).

Some of the other pieces look to be on the verge of making a bid for freedom, however. 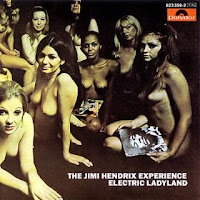 I can't recall whether Jimi has appeared on the soundtrack before, but I'm glad he has. Genius is a much abused word when it comes to 'rock' musicians, but Jimi deserved the title more than most. Dying at the ridiculously young age of 27, he could do things with an electric guitar that defied belief, using distortion, feedback and effects to extend the capabilities of the instrument to a level that has not been attained by anyone since. Electric Ladyland may well be his masterpiece, a sprawling double album that incorporates blues, rock, psychedelia and soul. I really liked the original cover (ahem) when I was a young impressionable lad as well, although that seems to have been replaced by a more innocuous design in the re-release programme!

Here's Jimi in Atlanta, playing Voodoo Chile from Electric Ladyland. Bear in mind there's only one guitarist on show here - no backing tracks, no studio effects - one man and his guitar. Jaw-dropping stuff!

(I think I knew that really - senior moment)