I could resist the siren call no longer. Was it the impending start of the new football season that dragged me back, or the potential for a new computer to handle the 3D graphics without st-st-stuttering? Or the box, sat enticingly next to the computer, Mourinho-alike on the cover giving me the come-on?

Or, most likely, the long day stretching ahead of me, jobbing and blogging out of the way by early morning?

Whatever. I slid the silver disc into the drive, waited for the game to load, and once more I was no longer Paul Waring, unemployed mild-mannered accountant, but Paul Waring, unknown football manager blithely promising my chairman that qualification for European competition through my eventual league placing was not only possible, but practically guaranteed.

And it all started so well. An unbeaten pre-season performance, including wins over Benfica, Anderlecht and Ajax suggested we would hit the ground running come the real thing. Sadly it was not to be. A tight (and undeserved) 3-4 reverse at Middlesborough was followed by a succession of 0-0 draws home and away as Jo and Saha flattered to deceive upfront and my team of expensive mercenaries decided they couldn't motivate themselves sufficiently under my management. Luckily, wins in Europe and in the League Cup (against, admittedly, far inferior opposition) is keeping the team together and goals from, of all people, Victor Anichibe, mean we enter October improving steadily from a poor start. Although 14th position needs to be improved upon rapidly if I am to make it to the next transfer window still in a job!

In other news, the real Everton continued this season's preparations with a win (on penalties) against an MLS select eleven - not a bad achievement, as the first team from England to beat the MLS in pre-season in the last seven years. And at the time of writing, Joleon Lescott is still an Everton player, despite continuing overtures from Man City. Which can only be a good thing.

Dragged myself away from the computer screen to have a long chat with Simon in Southampton, who seems to be getting some positive noises from the local job market - here's hoping! I also managed - by virtue of leaving my mobile on 'mute' after my trip to the job centre on Tuesday - to miss a succession of calls from my old boss about one of the opportunities I mentioned earlier this week. So maybe - just maybe - there are some hints of movement in the job market for us poor souls!

Oh, and I should point out - in relation to yesterday's comments - that it would appear that my recollection of the Pretty Woman affair is (probably) correct - I did buy the disc for my lovely wife, purely to obtain one song she wanted on her iPod. This must have been before the advent of the iTunes Music Store though - my usual source for the odd (in both senses of the word!) songs Mrs W asks me to track down from time to time...

I would also add (Mr Day) that I proudly own the greatest hits of Wham! - on both vinyl and CD, and also confess to more than a couple of Girls Aloud tracks lurking in the collection somewhere. Nowt wrong with a a bit of pure pop from time to time - especially when sung by hot young totty (ahem). Which also gives me the excuse to post one of my favourite t-shirt slogans of the summer, spotted at Glastonbury once or twice this year... 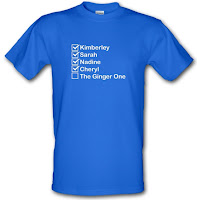 Harsh indeed, but fair, I feel!

Mrs W came to her senses this evening, realising that a bowl of soup and a chunk of Italian bread, no matter how lovingly prepared and tasty it might be, does not a decent evening meal make. So tonight it is haddock fillets, baked in a citrus sauce, accompanied by potato croquettes and stir-fried vegetables. And a cheeky bottle of white. So normal order is restored once again, happily!

Despite owning a couple of their albums, LCD Soundsystem mean very little to me. Loosely dumped in my 'Electronica/Dance' genre in iTunes, they actually transcend this classification by covering a range of styles, aided by a series of collaborations with other artists. More than a touch of Talking Heads in this one, the snappily-entitled "Daft Punk is Playing at My House"

Right, off now to get the team ready for the next game, home to ManYoo (gulp...)
Posted by Paul Waring at 9:35 am

haha stark contrast to my winning the league 3 seasons running! winners of uefa cup (i think!) maybe the league cup once and the community shield! no fa cup though, keep getting the annoyingly impossible to beat chelski!