Dragged early from my bed this morning to deal with The Hunter, (otherwise known as Pedro, Pedders or Pedderoni Pepperoni) who had decided to bring in a little vole (or was it a shrew?) to play with. Luckily, Mrs W had managed to cover the vole with the Tupperware box that doubles as a critter rescuer. This seemed to excite Pedro still further - he probably thought we'd helped him trap his new playmate for his entertainment...a notion that was summarily put to rest when he was thrown and locked in the living room while I took Mr Vole into the garden to be released into the wild, where he could take his chances. Unfortunately I was dressed only in a dressing gown to perform this delicate operation - a dressing gown that was not particularly securely fastened at the front, and which threatened to fly open at the slightest provocation. This was a touch difficult to deal with, both hands being engaged in keeping the vole under wraps until I got to the edge of the garden. Luckily I managed to preserve both my dignity and the vole's existence (in the short term at least) without further incident.

Pedro's getting a touch too good at this hunting lark - this is two voles, one mouse and a bird that have found their way into the house in the last week or two. Admittedly one of the two voles had been dead for some time when it found its way into the downstairs loo, but all the other critters were alive and kicking on their introduction to Waring Towers (and hopefully remained so for sometime after their release).

I think a bell is in order if things don't improve! At least he is finding all the entertainment he needs at the back of the house and has not been tempted further afield...yet!

Took a call from a headhunter this morning - something I though had gone away back in March appears to be back on the agenda again, and another opportunity with a national firm of accountants also appears to be imminent. So my CV is back out there and - hopefully - will get the attention it needs for one or both of these vacancies.

Oh, the postman knocked on the door as well today. Remember the poncho and shemagh I ordered a while ago, in plenty of time for Glastonbury and Latitude? Well they arrived today. A week after the end of Paul's festival season. They will do the job though. Next year.

After lunch, which comprised yesterday's leftover tacos (very nice too!) it was up to Preston, to drop Son No 2 off at his girlfriend's house. No need for the satnav, he insisted, I know the way!

Which he did. Kind of.

Back home then, to a quiet house to catch up on some blogging and some reading. I'm now reading 'Crosstown Traffic' by the great rock journalist Charles Shaar Murray. Ostensibly a biography of Jimi Hendrix, it gets the 'life story' over very quickly, before moving on to the far more interesting discussion of Hendrix's place in '60s culture, as a black man working in an essentially 'white' oeuvre, as an ex-paratrooper during the Vietnam war, and of course as the greatest guitarist who ever lived. 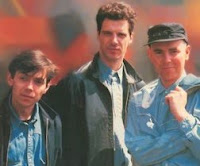 The Kane Gang were, briefly, on the verge of success and recognition in the mid '80s - success and recognition that ultimately passed them by despite a couple of cracking singles and a strong (if patchy) first album. They were on the Kitchenware label, home of a number of similarly melodic and intelligent bands, including Prefab Sprout, The Daintees and Hurrah! amongst others. Essentially a white soul band, the lack of a charismatic front man (or, you could argue, any charisma at all) ultimately stood against them at a time when image was all.

Despite the quality of their material.

'The Miracle of' is a two-cd collection released recently on CD, that brings together their first album (called, simply, 'Miracle', and which I have lurking on vinyl somewhere) with various singles and b-sides.

Their biggest non-hit was 'Closest Thing To Heaven' which was released to general indifference on more than a couple of occasions - but it is still a great example of mid-'80s blue-eyed soul.