A double-header today - I was too busy yesterday to do a single Day 115 write-up, and, sitting here now, I'm struggling to actually remember exactly just how I filled that day. Fannying around on the computer, probably.

116 days in, you will appreciate, and it's getting just a touch difficult to come up with new things to write about - especially when the phone steadfastly refuses to ring and the website trawls reveal a continuing, disconcerting, lack of sensible jobs in sensible locations. Still, this is the challenge I set myself at the outset and it is, in part, the need to continually come up with something to write about that helps keep the brain ticking over.

So what to write about? Discussed this over lunch on Day 116 (of which more later) and there's been a request for more recipes, and for more TV/film write-ups. And the ironing anecdotes are wearing a bit thin now as well. So I'll see what I can do!

Oh, I remember what I did on Day 115. I dried off and re-packed my tent in readiness for Latitude, I hung a picture that my Mum had bought for Mrs W (two black kittens) on the staircase wall, and I fixed the kitchen lights. Fixing those lights is like painting the Forth Bridge - it's a never-ending job. On the face of it, they look great - eight floodlights in two banks of four - but in practice they are an absolute pain in the backside. Barely a week goes by without one of the bulbs blowing - and they are the old-fashioned screw-in type rather than the bayonet fitting. Occasionally unscrewing the bulb leads to the bulb breaking and the 'screw-in' bit staying behind, necessitating a fiddly exercise with a pair of pliers to retrieve the broken bit. Also, there is at least one bulb that mysteriously manages to unscrew itself slightly, with complete disregard for the laws of physics, such that it flickers maddeningly while I'm trying to cook. We used to have the lights on a dimmer switch, which was fine until one day it decided to catch fire - turned out it was woefully underpowered to control the eight bulbs and decided to give up the ghost - luckily while we were in the house and able to turn the power off before the whole house went up!

Out early on Day 116 to get the weekly shop done - nothing too exciting on the menu for the next few days I'm afraid - some tacos and the Guinness casserole for which you've already had the recipe, along with some 'fried shite' (also previously explained) for Sunday night. Tacos are a Mrs W favourite - I love the taste, but tend to find them a bit fiddly and messy for my delicate sensibilities. In an attempt to find a more 'user-friendly' variety, I picked up some taco 'trays' this time - they look ever so slightly genteel, but if I can eat them without spilling half a pound of taco meat and cheese down my front, I can live with that.

On the way back from the supermarket, I got a call from my old boss looking to rearrange the lunch planned for the following day, so we agreed to meet up at lunchtime for a bite to eat and a catch-up on things. 'Things' included dogs, cats, the fallibility of computers, festival toilets, the need for more recipes in the blog and, naturally, football. But we also got to talk about a few work-related matters, including some recent successes they have had in the marketplace which is keeping the team busy and stretched. No immediate use to me of course, but should circumstances change in the future, it is hopefully of mutual benefit for us to keep in contact. I'm certainly not going to burn any bridges or close off any opportunities for work, be that temporary or permanent. But in any event, he's good company and it was a very pleasant way of spending a lunchtime. 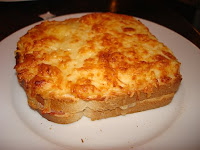 Where did we eat? We went to Cafe Rouge, a pretty decent chain serving French-style food including decent baguettes and grills at lunchtime. I had a very pleasant Croque Monsieur with a Stella and a large espresso, since you ask.

After lunch, I called in at PC World in an attempt to find a solution to my immediate computer problem - how to get my machine to boot up successfully with a mouse attached! Solution came about with a new wireless mouse - made by Logitech rather than Microsoft - and, for now at least, the problem appears to be solved.

Home to rescue the loaf I'd started cooking this morning. Timings meant I had to leave the cooked loaf sitting in the breadmaker for an hour or so after baking - you are meant to take it out immedately it's finished to cool. However the trauma didn't seem to have hurt the loaf at all, other than to crust up the outside a touch more than usual. Which is not a bad thing, in our book. I then set some dough to mix for the bread rolls we needed to go with the sausages for the night's tea - another success, I have to say, although I still have to get my head around the extent to which these things increase in size while they are 'proving' in the airing cupboard. Still, better too big than too small, eh?

Tea was consumed - naturally - watching the second instalment of the Celebrity Masterchef final. Initial predictions were thrown by a solid performance from outsider Iwan, and a stutter or two from frontrunner Wendi. Which means that all three contestants go into the final stage with everything to play for, as they say. Friday night's garbage film is going to have to wait, I think!

Bit of 'alt-country' on the soundtrack today, from New York's Felice Brothers. The Adventures of the Felice Brothers was recorded, I am led to believe, on two-track tape in a chicken coop. And the rough and ready charm of the album makes that very believable indeed...can't hear any chickens, though. Generally only available at the band's live shows, I picked up my copy through the wonders of eMusic, and very fine it is too, if you like that sort of thing - which I appreciate not many people do.

The three Felice Brothers are augmented by a friend called 'Christmas', who is described as a 'travelling dice player', and 'Farley', who plays washboard and fiddle. Honestly, what's not to like?

Here they are performing 'Whiskey in my Whiskey' a year or so ago. I feel the song title tells you all you need to know!