Leisurely start to the day, as Simon was not due to arrive until after lunch. Filled the time by having a wander down to the 'Village' - a relatively small area of shops and foodstalls, where I managed to resist the siren call of the army surplus stall - it is an absolute given that at some festival in the future I shall buy some camouflage trousers or a flak jacket or somesuch nonsense - but not this one!

Still had some time to kill, so thought it best to start drinking the wine. That made the time pass rather more quickly and effortlessly! 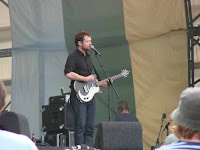 Simon eventually turned up around half one, and after unpacking, we headed off into the main arena. After a quick wander round, it was off to the main (Obelisk) stage to catch the end of The Broken Family Band, about whom I've heard lots of good stuff. And they were...ok, I guess. I need to give them a bit more of a listen I think.

Simon then went off to see The Duckworth Lewis Method, a cricket-themed ensemble led by The Divine Comedy's Neil Hannon. 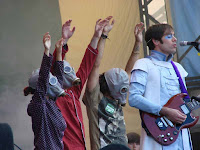 I stayed at the main stage to see Of Montreal. I picked up one of their albums on eMusic, and thought it was pretty good, and had heard good things about their stage show, which was...interesting, to say the least. In the campness stakes, they made the Pet Shop Boys (see later) look like Slayer. Unfortunately, the music failed to live up to expectations - pleasant enough, but some tunes would have been nice? 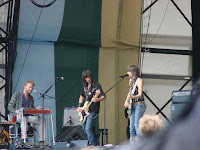 A quick break for some Argentinian chorizo and chips - not my most inspired meal choice of the weekend, I have to say - then back to the Obelisk for Pretenders, who rocked like a mother (or something). Chrissie Hynde (who is wearing pretty well for an old bint) got the mood of the afternoon pretty well bang on, playing all the hits albeit interspersed with some new stuff, and got the crowd going as well. Best performance so far. 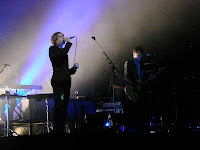 Then to the Uncut Stage, to get a decent speck for Squeeze. But before them, we caught the full set from Mew, an electro-ish band from Denmark - who were pretty damn good, I have to say. With a small but enthusiastic crowd (especially the bloke stood two down from me at the front) roaring them on, they played a pretty eclectic set that had us both nodding in appreciation - another one to explore further when we get home I feel. 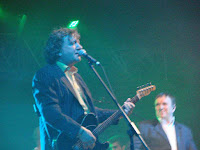 So Squeeze - highlight of the day for both of us, I think. All the hits, band tight as a gnat's chuff, and they were really enjoying themselves as well. Only Difford and Tilbrook from the original band, but that's all you need, really. Lots of singing along and big smiles from both the band and the audience. Top entertainment and very cool (for cats).

Simon then hung around for Bat For Lashes, while I dashed back the the Obelisk for the Pet Shop Boys. 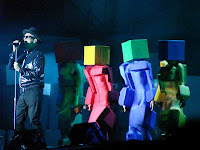 Good to see them again after the Manchester Apollo show reported on the other week - and that's essentially what we got tonight - same set, same dancers, same little dance from Chris Lowe. Very, very good, but I'd seen it all before which kind of took the edge off for me.

So back to the tent, where any thought of a late night was stymied by the arrival of the rain that had been promised all day. Early(ish) night with the promise of more fun tomorrow!
Posted by Paul Waring at 4:22 pm

As a supplementary to Paul's blog I thought I would add my thoughts on the two bands that I went to see solo.

First up was the Duckworth Lewis Method. They are a cricket-inspired group formed by Neil Hannon of The Divine Comedy and Thomas Walsh of Pugwash. Divine Comedy are big favourite of mine and Neil Hannon is one of the best song writers around. I know nothing about Pugwash but will now check them out! Neil looked like former England wicket keeper Jack Russell sat at his keyboard whilst Thomas looked WG Grace with his big beard. A reasonable crowd not really knowing what to expect (the guys next to me just hoped that this was a chance to get updates on the Ashes score which they didn't get!). The music definitely has the feel and sound of Divine Comedy crossed with English old time music hall. It was good fun and both the band and the crowd seemed to really enjoy it.

Which can't be said for my next solo choice - Bat for Lashes. Bat for Lashes is the pseudonym of Natasha Khan and her music is quite new age gothic almost folk. I like the two albums she has released but not sure how they would come across as a headliner at the end of a long day but as PBS live wasn't really my thing and Charlotte Hatherley (formerly of Ash) is part of the live line up I thought I would give them a go. My worst fears were realised especially after the excitement and energy of Squeeze who had been before. The tent was heaving and noisy (as you would expect at a festival) but this doesn't go well with a sound that is almost a whisper at times. The songs were also too one paced as one just seemed to melt into the next.

After 5 or so songs I decided that I had enough and left for 100% organic burger from Argyll (which was great), the start of the Guilty Pleasures set (Paul has covered this on the Saturday update) and then back to see the last few songs from PBS. If you are looking for a show and theatre then PBS are clearly for you. If you are looking for the excitement of seeing a band play their best songs live then you aren't going to get this with PBS. However a pleasant way to spend 20 mins or so.

The day was a very enjoyable start to a great weekend. Thanks Paul!