Today's soundtrack: Kool & the Gang - Get Down On It

...but we might give it a pretty good go!

When I went into the office on Monday, as well as enjoying a very pleasant lunch with the boss, it was nice (if a little strange) to call in the office and see a few old faces. I also picked up my leaving card and a gift - a gift card for Selfridges.

To those of you who left such kind comments on the leaving card - thanks very much. I do miss you all and feel as though you might be missing me a little bit too. Like a hole in the head, probably.

Anyway, this morning and in an attempt to stop dwelling on the events of the last couple of days, I took myself off to Selfridges to cash in said gift card. A bit of retail therapy felt very much in order! So back to the Trafford Centre. 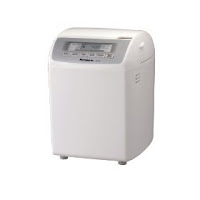 After a very acceptable cappuccino and muffin in Cafe Nero, it was off to the big shop for a browse. A couple of things caught my eye - including a espresso machine and a 'full band' version of Guitar Hero (rejected as I've enough real instruments to be learning without toys getting in the way) - but I settled upon a Panasonic Breadmaker. I'd toyed with getting one of these a while ago, and a few people have raved about them, but I'd always been a bit concerned it might be a five minute wonder, relegated very quickly to the back cupboard. But today I thought - sod it, treat yourself! So I did. Trip to Tesco's tomorrow for flour/yeast etc and full report to follow after I've experimented!

Still in frivolous mood, I then took off to the Apple store and bought an Airport Express - basically a wireless receiver that can be used in a network to extend a wireless network or to set up wireless printers, amongst other things. I bought it for one very specific purpose, however. Linked to the network, but attached to the hi-fi in the living room, I can wirelessly stream my iTunes library (all 54,388 songs!) from my computer in the study to the living room and (and here's the clever thing) control it all using the 'Remote' application on my iPhone!

Let me run that by you again. I can sit in the living room, and play anything from my music collection on the hi fi. And I can control it all using my mobile phone. Oh, and the display on my phone not only shows the album/track selected, but the album sleeve and in some instances the song lyrics as well. It's magic, I tell you.

With one thing and another, I left you all dangling a bit on the latest culinary adventure. A cauliflower cheese, if you recall. And mighty fine it was, too. On the face of it, a very simple thing to cook (if you're comfortable making sauces, that is) but actually very easy to get wrong as well. The problem is that cauliflower acts as a sponge when you boil it, soaking up a lot of water in its florets that will turn your cheese sauce watery if you don't allow for this. So you need to do two things - firstly, having boiled the cauliflower until it is 'al dente', drain fully, then cover and allow it to steam itself in a colander for ten minutes or so. This will take out a lot of the extraneous moisture. Secondly, make your cheese sauce thicker than you think it needs to be so that if the remaining water in the cauliflower can be taken up by the sauce without it turning watery. 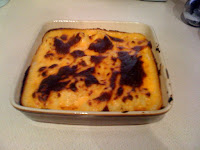 Do all that, and the results will look like this (after 15 mins or so in a hot oven). Very very tasty.

Kool and the Gang on the soundtrack today. Hot Dang, that's funky! 'Ladies' Night' playing in the background, reminding me of the many times I tried (and failed) to impress the laydees out on the dance floor by throwing a few 'shapes' to the steady disco groove. In my white socks and loafers (ask your dad).

Hi Paul,
Just a quick note to say just how much I'm enjoying the blog!
I'm sorry to hear about Katy Teabag - we lost a Jack Russell in similar circumstances last year. You never realise how much pets become part of the family until they have gone.

Anyway keep up the good work - and it's great to see a Pompey player score for England tonight!