More baking today, a 'Maple and Pecan' loaf made, remarkably, with the addition of maple syrup and chopped pecan nuts. I'm not quite sure about the blend - it's too sweet to be used for sandwiches and too 'bread-like' to serve as pudding - but spread with a little butter and honey, it'll do for me.

Despite the weather forecast, it stayed dry and sunny most of the day today - but a tad too cold to sit out and enjoy the weather. Mrs W persevered for a bit, wrapped up in a fleece like a pensioner on Southport beach on a dull bank holiday, but soon admitted defeat and came back inside, putting the central heating on for good measure.

No such problems in Bahrain, where the temperature was up in the high 30s for the Grand Prix. There was certainly no way this race was going to be rain-affected, although there were some concerns about sandstorms. Despite their excellent start to the season, the Brawn team had been off the pace a bit in qualifying, and there was a definite feeling that the other teams were steadily catching up with the early season pace-setters - particularly Toyota, who had both their cars on the front of the grid.

In the event, Jenson Button in the Brawn drove an almost perfect race to record his third win of the season. The win ultimately hinged on him getting ahead of Lewis Hamilton on the second lap, leaving other challengers stuck behind the World Champion for long enough for Button to challenge, and ultimately pass, the Toyotas at the first round of pitstops. After that, he was in total control of the race and - concerns about overheating notwithstanding - was able to stay in front for the remainder of the race.

Whether Brawn will be able to maintain this level of performance is debatable - the other teams are getting closer race by race - but their stunning start to the season has made this one of the most interesting (and competitive) Grands Prix seasons for a long time.

Other than that, there's not a lot to report about our Sunday - brought the blog up to date and did a touch more 'adventuring' on the computer - and settled down for a comforting dinner (chicken cordon bleu, since you ask) and the latest episode of Dexter. Series Two is getting better and better, a real improvement on the also excellent Series One, and it took a lot of self-discipline not to continue watching. In the event, the call of Hell's Kitchen (on Mrs W) was strong enough to persuade us to save the remaining three episodes for another time. 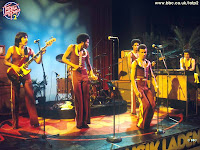 A touch of disco on the soundtrack today - the wonderful Heatwave. Fronted by Rod Temperton, the multinational/racial band brought a touch of intelligence to the late '70s disco scene - along with Chic, they were the disco band it was ok for the rock fans to like. Temperton went on to greater fame (and wealth) working with Michael Jackson on Off the Wall and Thriller, but made his reputation (and no doubt got the Jacko gig) on the back of gems like Boogie Nights, Always and Forever, Gangsters of the Groove and Mindblowin' Decisions.

Here's Boogie Nights from 1977. It wasn't all punk rock you know. Get your white socks and loafers on, and get down to Tiffany's, or Romeo's, and boogie on down. If you can't dance to this, then your guilty feet have got no rhythm, as someone once might have said...