Last day with the boys today, so making the most of having them around. The day started with just Son No 1 and myself in da house, so we busied ourselves playing the adventure game we bought the day before in Manchester - 'The Longest Journey', a prequel to a game called 'Dreamfall'. The two games came packaged together, and although I missed them when they came out, they appear to have won shedloads of awards from the computer gaming fraternity at the time.

So for a happy few hours, I adopted the persona of 'April Ryan', an 18 year old art student from the 23rd Century, as she swapped between a fantasy dreamworld and the reality of student life. Back in the day, there used to be loads of adventure games of this type - the real 'hardcore' games being text-only - now they are a very small niche indeed, so it was good to find a couple of games still available. They must have cost a bomb to produce, and I suspect sold relatively few copies - so they are probably amongst the last of a dying breed. Great fun though, if you've got the time and the patience to play them.

Son No 2 arrived back from Preston around half eleven, and the boys headed off back down South after I'd filled them up with sausage and bacon sandwiches using the last of the bread. Great to spend some time with the boys over the last couple of days, and especially nice to see them both at the same time, something that happens very rarely now they are both grown up and living their own lives at opposite ends of the country.

Once they'd gone the house felt very empty indeed - so to take my mind off the emptiness, I loaded up the second of the two games we'd bought yesterday - this being the online version of the Lord of the Rings. This time I adopted the persona of a (male) elf from Rivendell, battling goblins alongside dwarfs somewhere in Middle Earth.

I am nothing if not versatile.

No fancy cooking today (apart from a very tasty French 'Rustic' loaf, involving three (count 'em!) different types of flour) - Mrs W and I dined on Steak Pie and Chips and Gravy (yummy!) tonight, whilst watching an episode of Dexter...yes, another programme involving serial killers, but one in which the twist is that the serial killer is actually our hero! Very good indeed.

Today's blog title obviously comes from the name of the album playing in the background as I type. It should be a Half Man Half Biscuit album title really...assuming it isn't already! 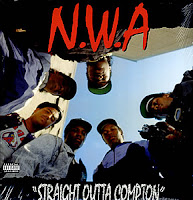 So what's a nice, professional, white middle-class boy like you doing listening to hard core rap, you might be asking? Well, it's pretty good, is why. I'm not a great fan of rap or hip-hop, but there are elements of the genre that I really like. Early Sugarhill (Rapper's Delight, Grandmaster Flash, Funky Four + One), Public Enemy and NWA just about covers it, although there is some Jay-Z, Kanye and even some Eminem lurking on iTunes somewhere. I never really got into the Tupac/Notorious B.I.G. stuff though.

NWA come, as you might expect, from Compton, California. The original group included Ice Cube, Dr Dre and Eazy-E, who all went on to further success rapping, acting and producing - but this, their first album, really established a new genre - Gangsta Rap - that hadn't existed previously. Hard-hitting, openly violent and misogynous in equal measure, it out-punked punk in its anti-establishment stance, and was seen as genuinely subversive at a time when inner-city rioting and racial tension was endemic in parts of America. 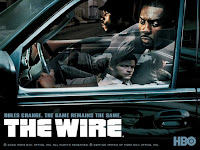 Watching that reminded me of the greatest series to appear on television in recent years, 'The Wire'. Filmed by HBO in Baltimore, over five series it covers a range of topics relating to life in that city, initially focusing upon the drug wars between the police and rival gangs of dealers, but later covering schooling, politics, labour disputes in the docks and the role of the media in reporting what is happening in the city. There are no 'heroes' in this drama - nor any overt judgments - and you get to see what's happening from all sides, enabling you to relate as easily to the drug barons as to the law and the politicians.

The Wire creeps up on you slowly - there are no easy resolutions, no 'cases solved' at the end of each episode, and events in series one may have no real impact until later series. Major characters are not guaranteed to survive, and the good guys don't always win. The street language can be impenetrable at times.

But over time you attune yourself to the language. You identify with characters on both sides of the moral divide. And suddenly you need your fix. You may not make it past the first two episodes - but if you do, it will have you all the way to the end.

From Series one, here's D'Angelo teaching Wallace and Bodie about chess, in language they can relate to. Some of this language is NSFW, so be warned.

Labels: Lord of the Rings, NWA, The Wire