The day started early, doing my 'cutting-up' and getting across to the parents to be picked up for the drive down south. We stopped on the way at Warwick Services on the M40 and was staggered to see the place was almost wholly blue and white - where were the ManYoo fans? (insert own fanbase/location joke here). 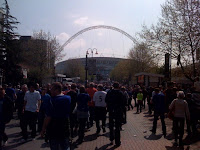 We parked up at Hillingdon and got the Tube in to Wembley Park. Now I've been to the 'new' Wembley before, for a conference, and have passed it on the train into Euston numerous times, and an impressive sight it is too - but none more impressive than the first view as you reach the exit of Wembley Park and look straight down Wembley Way, with the combined voices of thousands of Evertonians all singing and chanting.

There was a real carnival atmosphere on the day, helped by the glorious weather, and the two sets of fans were getting on well together (although this changed a touch in the stadium itself - more later).

So the Waring clan congregated outside the station, and made the walk up Wembley Way, stopping off for flags, jester hats and programmes on the way. The obligatory Fellaini wigs had been pre-purchased. All for the kids of course.... 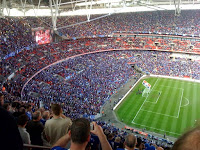 Into the stadium itself, just as the Everton coach arrived and the players came out to inspect the pitch and sample the atmosphere. Our seats were in line with the edge of the penalty area, high up in the rafters. Oxygen almost required to get there. Despite the height, the view was fantastic and the atmosphere - even in a quarter-full stadium - was already intense. How much more intense it was going to get...well, we would find out a few hours later.

And so to the game itself. Black armbands worn by the players in recognition of the Hillsborough anniversary - but no minute's silence? Perhaps concerns over fans' behaviour, given the two teams involved? I hope not - and certainly the presence of banners in the Everton crowd and chants of 'Stand up, for the 96' should have allayed any concerns in at least half the stadium.

As an aside, it's a shame that a (very small) minority of our fans couldn't extend the same courtesy and respect to our opponents. Very sad to see some of the younger Everton fans responding to taunts with 'aeroplane' mimes and reference to Munich. But it was a minority, and did not lead to any serious trouble - at least that I could see from where I was sitting. 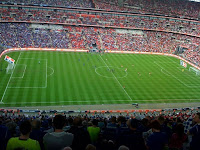 Anyway, the game itself. We knew there were going to be some changes to the ManYoo team, but even so, we were all surprised by the team put out by Sir Alex. Surprised and hopeful? Well yes, albeit with some reservations - the presence of Ferdinand and Vidic, and the knowledge that any team Ferguson puts out will have a chance against any other team.

Well, it wasn't the most entertaining of games for the neutral, I have to admit. Two strong (the strongest two?) central defensive pairings and two depleted attacks meant it was always going to be a game short on goalmouth

action, and so it proved. Few chances of note, a couple of decent penalty shouts (for both teams - yes, the Wellbeck incident would be given more often than not, but Pienaar also had a good shout in the first half) and a breakaway by Tim Cahill that was brought back for reasons only known to Mike Riley.

Did David Moyes' mind games have any effect? Only Mike Riley knows that, but if they did - well, Sir Alex can hardly complain now, can he? (Memo to Rafa - that's how to do it, mate!)

When the game petered out to a penalty shoot out - well, was there an Evertonian in the ground who thought we'd win it? Especially after Timmy skied the first one high over the bar? Not me, for one. But then the comedy of Berbatov's penalty and the quality of Howard's save from Ferdinand offered a glimmer of hope. Our four other penalty takers showed their bottle and their quality by scoring and... there it was! We'd done it! We were in the final! Pandemonium in the stands, and a mass departure from the Red end of the stadium. The celebrations went on...and on...and on!

I know we've won nothing yet, but to get to a Wembley semi-final, to beat United (having already beaten Liverpool and Villa to get there) and to have a realistic chance of some silverware (Chelsea notwithstanding) is a good, good feeling. Just need to get tickets for the final now!

The journey home was uneventful, and I crawled into bed at about half past midnight, tired but happy.