Well, after the euphoria of yesterday, it was back to the reality of the daily grind today, scanning the job ads and talking to recruitment agents. I had to resolve a little local difficulty relating to one application that involved two separate agencies, but think I managed to reach a suitable conclusion, helped by the fact I'd been up-front and honest with the second agency about my previous contact with the first. Just hope it has no implications for the application itself...

That aside, I spent a happy morning emailing various ManYoo and Liverpool supporters to have a gentle dig, catching up on the internet traffic relating to the game and re-running the penalty shoot-out on YouTube. The consensus appears to be that, yes, United should have had a penalty, both teams were pretty poor and Mike Riley might have been influenced by the pre-game 'mindgames' but that, on balance, Everton getting through to the final is a 'good thing for the game of football'. Some of the praise being sent Everton's way falls just this side of being patronising, but most appears to be completely genuine in its delight at the team's achievement on a relatively limited budget. A lot of positive comments about the quality and vociferous nature of the team's support as well.

Did I mention the penalty shoot-out? Apologies for the size of the clip, it doesn't seem to want to shrink...

But we've still won nothing yet....

Having regaled you for weeks now with the quality of the cooking at Waring Towers, I feel today I may have slightly overreached myself. Having exhausted the straightforward bread recipes, today I tried out the recipe for rye bread. Not some namby-pamby diluted loaf, with as much white bread flour involved as rye, but a full-on, hard-core 100% rye loaf. A loaf that feeds on almost three times as much yeast as a regular loaf. That needs its own, special mixer blade. 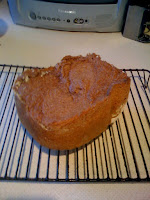 Anyway, the results are opposite. Hmmm. Now I know that rye bread does not rise as much as proper bread, but we appear to have achieved negative rise here. I'll tell you what it actually tastes like tomorrow.

In the meantime I have retreated, sulkily, back into my safety zone. The granary loaf is now sat resting in the machine, ready to bake and reassert my reputation.

And in some form of reputational double-whammy, my other (self-awarded) reputation for having impeccable musical taste is dealt a hammer blow by the soundtrack for today's piece of bloggage. For those of you who are unfamiliar with their oeuvre, Puddle of Mudd belong to the pack of shouty American bands with guitars and copious tattoos who emerged in the early 2000's, feeding off (and diluting) the grunge of Nirvana and Pearl Jam into a form more accessible to music television and to young male teenagers. Think Nickelback, Staind, and Creed and you'll get the picture. They are bands that Son No 2 listened to a lot when he was probably 13 or 14 - and did a lot to get him interested in music in the first place (along with the Gallagher brothers).

So why do I own this stuff, you might be asking? And well you might. To which I would say that whilst it's all a bit much to take at an extended sitting, a lot of it is right good fun. It sometimes takes itself a bit too seriously - but not all the time - and the bands do tend to have a nice line in the 'power ballad' a musical form that was hugely popular in the '80s (and still plays a big part in drive-time radio and 'Dad Rocks!'-type compilations). And I'm a big sucker for the power ballad.

Anyway, this is 'She Hates Me'....vocals not safe for work I'm afraid!

Congratulations on the win yesterday. Good to see one of the smaller Premier League sides have their day in the sun!!! :)

Nothing wrong with some good old AOR style power ballads.

I didn't believe that there was someone who had a music playlist as all over the place as mine but having seen your weekly list from Take That to NWA via Louis Armstrong, Til Tuesday and Page & Plant I bow my head in respect!

"all over the place"?

I think you'll find 'eclectic' is the accepted term!

So when is the World's Richest Team (and I don't mean Citeh)going to join Everton and Wolves amongst the big boys?

You big city boys with your fancy words! We say it like it is in the country....

I think it will take a few years for the 'Stoke to make their way up from 18th in BSS to the Prem.

Oh you mean the Rs. Well it depends if Flavio concentrates on F1 and Renault rather than hiring and firing managers/coaches and the 2 billionaires and a millionaire actually spend some cash on the team rather than spending the extra money they have got out of the fans on a "world brand ambassador" (I am not joking!) and new corporate seats. Can't see it happening any time soon.