...the day we went to Southport?

Well, we did actually. We fancied a day out, and I've not been to Southport for years. Mrs W had never been. So off we went. 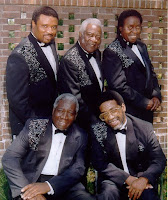 I remember my last trip to Southport, actually. Must have been about 1987-88, when I was working in Liverpool. A gang of us went to the Southport Theatre to see The Drifters. Or at least one version of The Drifters. I think there was one original member still with them at that stage, with three other 'newcomers'. They were great actually, had us up dancing in the seats and played all the old hits - alongside some Michael Jackson and Commodores stuff, which felt a bit wrong. Enough good Drifters stuff to play without that.

Anyway, no Drifters today - and not a great deal of 'sea' at the seaside 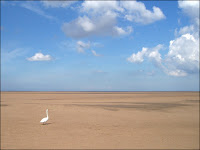 either. Huge amounts of sand, though. The tide was out, and when it's out at Southport it's really out. I was pleased to see that you can still drive your car onto the beach at Southport. It may be my imagination playing tricks with me, but I'm sure the first time I sat behind the steering wheel of a car was on Southport beach. Sat on my Dad's knee, doing the steering while he was doing everything else and making sure I didn't hit anything (or anyone). That's the sort of thing you could do in the '60s.

The other thing there was plenty of at Southport today was wind. It was blowing a hooley out there! So we parked up, went for a stroll and decided we'd worked up an appetite. Found a Chiquito's close to the prom, and had a very agreeable lunch of Chimichangas (me) and Mexican fishcakes (Mrs W).

So back to the car, and back home to watch the National.

I know there are mixed views about the Grand National, but I've always loved the spectacle and history of the race - and the chance to have a flutter. As always, I'd studied the form, trawled the web for tips, and made a very considered and informed decision on my horse selection. Which is why one fell at the second and the other, so far as I am aware, is still running. Mrs W, on the other hand, looks at the names and picks ones she likes. So naturally she manages to get her main selection placed. Of course I paid for the bet as well, so I'm doubly out of pocket here.

You'll be pleased to learn that last night's film was as good-bad as could have been hoped for - lots of blood, bit of eye candy for the girls and a bit of upstairs nudity for the boys. Tonight it looks like we'll be watching 'To Live and Die in LA', a 1985 film starring William Petersen and Willem Dafoe, which scores a highly respectable 7/10 on IMDB. I suspect a far better film - but as mind numbingly entertaining? We'll see.

You'll be pleased to hear the granary loaf baked yesterday was, if anything, better than the plain white effort baked first. I worry about the impact of all this on my waistline. But not much.

Lots of comings and goings next door - our neighbour has been on the verge of giving birth for about two weeks now but the signs are that something has finally happened. Smart money's on it being a girl....

Nice to have a bit of funk on in the background whilst taping this. The lead-off track on this compilation is 'Word Up' by Cameo, an excellent slice of codpieced 80's funk, although my favourite track on this album is the far lesser known 'Funkin' For Jamaica', by Tom Browne. Excellent use of trumpet! I'm working on the bassline....