Grand tour of the North today, Chester in the morning to meet with a recruitment consultant and then across to Liverpool in the early evening to catch up with an ex-colleague. So a busy day and a couple of sound excuses to get out of the house and to interact with real people again! 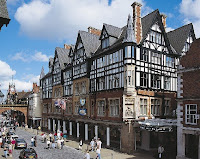 A nice drive into Chester with the sun out and the sunroof open. The city was very busy though, for a school day. I know Chester is always busy, but moreso than usual today for some reason. I do like Chester though - the city has a style that has not been totally eroded by the prevalence of all the usual high street names. That is largely down to the continued existence of the 'Rows', the split-level shopping arcades that grace the main shopping streets of the cities. The Rows still accommodate a high proportion of independent shops compared to most high streets, and also reduce the prevalence (or at least the impact) of identikit 'big store branding' that makes most of our city centres look so similar nowadays. Sadly the signs of the recession are there - a number of the bigger shopfronts stand empty, and there are a number of discount/poundshops springing up alongside the designer boutiques.

The recruitment agency was based in one of the Rows, up a steep flight of stairs. Spent a good hour with the consultant, going through my CV and discussing my options going forwards, and I came out with a pretty good feeling. Yes, the job market is lousy, but I know I have good, wide-ranging experience and ability - I just need to find the right role. There are now plenty of people out there trying to help me find that role, I just need to hold my nerve and maintain my self-confidence and self-belief.

A quick trawl round the food shops in Chester to pick up some goodies for the weekend, then it was back home to find a couple of parcels from Amazon waiting for me. I guess it's a bit rich of me to bemoan the decline of the high street whilst at the same time ordering my stuff online, but times are tough and I've got to budget accordingly. And unfortunately if that means buying online for half the price I would pay in the shops, then that's what I'll have to do.

So we now have an electric knife capable of slicing through the freshly-baked bread in rather more efficient fashion than the manual variety, as well as a couple of cheap Siouxie and the Banshees CDs and the latest from Doves, which has been picking up solid reviews recently. Off to see Doves in Delamere Forest in June with Son No 2, and they are also playing Glastonbury and Latitude this year, so best to get familiar with the new stuff before seeing them I feel! 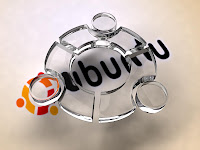 Then spent a couple of hours doing techy stuff with the netbook, downloading and installing the latest version of Ubuntu. The installation worked like a dream, until I tried to log in - the new version decided to ask me for a Username and Password that the previous version seemed to cope quite happily without. Well, I tried combination after combination of usernames and passwords, in upper case and lower case, but could I come up with the right combination? Could I buggery!

In the end it was back to the main computer to do a bit of googling, and then with a bit of jiggery-pokery 'under the hood', I managed to find the combination that the system was looking for. I still have no recollection of ever using this particular username, but I must have done, I suppose.

Then it was out to Liverpool to meet up with Kevin, my old colleague from Birmingham, who was up to see Gary Numan at the O2. In true Kevin fashion, he would have been driving round Liverpool in circles for hours had I not spotted him outside the Empire and managed to direct him to the car park. We found a bar and had a pleasant couple of scoops, putting the world to rights and picking up on the gossip from work, before I left him to meet up with his Numanoid mates and re-live his adolescence. I had gracefully declined the offer to join them at the concert a few weeks ago!

I shouldn't mock actually - I did buy the picture disc of 'Are Friends Electric?' when it came out (must be worth a few bob now?) and I do own Replicas. However I do have a long-standing jealousy of Gary Numan. My girlfriend of the time was a huge Numan fan - not least because he was the spitting image of one of her ex-boyfriends...the ex-boyfriend whose arms she hurled herself into when she decided to dump me.

Not that I'm bitter or anything. Or that I hold Mr Numan personally responsible.

Today's soundtrack also gives me little room to mock. I don't hold with the 'Guilty Pleasures' theory of music - I believe there is no 'bad' music, just music you like or music you don't like. However if I did have a musical 'guilty pleasure', then Queen would surely be it.

I saw Queen live once, at Liverpool Empire quite early on in their career, just before Bohemian Rhapsody went massive. Even at that stage Freddie really knew how to work a crowd, a skill he went on to refine and master at Live Aid and beyond. Freddie had not 'come out' at this stage, although the choice of Shirley Bassey's 'Big Spender' for an encore might have given us a few clues as to where his preferences lay....

'Live Killers' is a pretty good snapshot of the pre Live-Aid band, recorded in 1979 when they were still first and foremost a rock band, not yet a video-driven parody of themselves. As such it represents a good early 'Greatest Hits', with the added advantage of being recorded live, away from the studio trickery that was prevalent on their studio albums.

Queen really came into their own at Live Aid - this is how to work a crowd!