Good to have a bit of a family gathering once in a while, especially when the sun is shining and the living is (relatively) easy. Down to my parents, to be joined by my brother, his wife and two kids, and my brothers in-laws. Oh, and a mountain of Easter Eggs that were gaily distributed after dinner.

And a lovely dinner it was too. A massive chunk of beef, that took me the best part of half an hour to carve (traditionally my job to carve the meat at my Mum's - no idea why though!), served with mashed and roast potatoes, cauliflower, broccoli, carrots both on their own and mashed with swede, and yorkshire puddings, And gravy, of course. Followed up with a selection of desserts including apple pie, chocolate and sponge cakes, cheese & biscuits and coffee. And then followed by a long sit down! 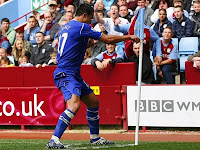 Whilst all this was going on, Everton were playing away to Aston Villa in a crunch match to determine who, if anyone, was going to challenge Arsenal for the last Champions League spot. Despite leading 2-0 and 3-1, Everton managed to end up drawing the match 3-3, which is a good result for Arsenal and probably confirms both us and the Villa as participants in the 'Europa League' next year, whatever that is. Could only manage surreptitious glances at my phone for scores over dinner, so had to wait until Match of the Day was on to see any of the game. 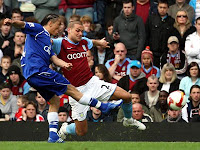 It's always difficult to get a real flavour for the game in the highlights, but both the free kick and the penalty that Villa were awarded in the second half (that resulted in the two goals that got them back level) looked a bit soft to my blue-tinted eyes. That said, even from my perspective I would have to concede that Villa were a touch unlucky not to be awarded an earlier penalty for a couple of clumsy challenges on Ashley Young by Tony Hibbert, who apparently got turned inside out by Young all game. That said, the Everton messageboards appeared to be outraged by the amount of diving that Young was doing - and the number of times the referee fell for it.

So a shame to be pegged back after being in a winning position twice, but I'd have taken a draw at their place if offered it at the start, so can't complain too much. We need to tighten up defensively again for the semi-final next week, but we are scoring from all over the pitch at the moment so if we can just score more than we concede, then we'll win. Obviously.

Arrangements all sorted for the semi next weekend, and I'm happily getting a lift to and from Wembley so haven't got to worry about the driving (well volunteered, Keith!). Six of us sitting together up in the rafters, but we are there, that's the important thing.

Back home from Mum and Dad's at around six, laden with plants, flowers and chocolate (and a cheeky bottle of Bailey's). Decided to sit and watch a couple of box-set episodes accompanied by a light bottle of bubbly that's been cluttering the fridge up since Christmas. Half way through we cracked, and finished off some leftovers we had in the fridge, just to top up our calorie intake for the day. Mrs W then left me to it, with Match of the Day and the Masters to watch.

Started with the back end of the Masters, at a time when Mickelson and Woods were making a bit of a last minute charge, stringing a few birdies together and challenging the leaders. I left them to it for an hour or so to watch the footy, returning later to see that the big boys' challenge had just fizzled out, leaving three players in contention - Cabrera from Argentina, Chad Campbell and Kenny Perry from the US. Going into the last two holes, Perry looked like he was home and dry, with a two shot lead - but he managed to drop shots at each of the last two holes to end up in a three-way tie with Campbell and Cabrera.

Very disconcerting the way the commentators made great play of Perry's incredible age - especially when he's two years' younger than me!

So into the sudden death play-off, where a few nerves started to come into play. Cabrera put his first tee shot into the trees, seemingly putting him out of contention, whilst the other two players hit relatively safe tee shots down the fairway. Cabrera then managed to bounce his second shot back onto the fairway off a couple of trees whilst the other two hit poor shots missing the green, Campbell finding a bunker. Cabrera and Perry then managed to rescue their position with strong approach shots and single putts, while Campbell two-putted and was out of the running.

On the second play-off hole, Perry sprayed the ball all over the place while Cabrera played safe, steady golf and ended up needing two putts from about 12 feet for the title, which were duly delivered. A shame for Perry, who had led for so long, but the chunky Argentinian (built far more for comfort than for speed) kept his nerve throughout and deserved his win. 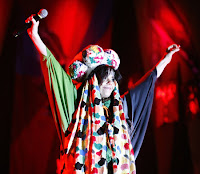 A bit of Björk this morning as I type this. Family Tree is an unusual box set, made up of a number of cds of differing sizes covering a number of themes - Roots, Strings and Beats - plus a full-size CD with a smattering of 'greatest hits', which is what we are listening to just now. Always had a soft spot for Björk, ever since her Sugarcubes days - the world needs the odd kooky Icelandic chanteuse around to provide a bit of variety and eclecticism to the overall musical mix. I saw her at Glastonbury in 2007, headlining the Other Stage and she put on a great show in the rain, bringing a bit of sunshine (and some particularly phat beats at one point) to a very gloomy corner of Somerset.