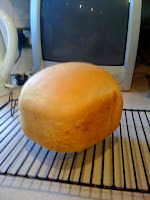 Firstly, off to Tesco this morning to stock up on flour, yeast etc so I could try out the new toy. All seems very easy - get your measurements right, chuck everything in the bowl, sort out your settings and stand back for four hours. And four hours later, open up and out pops a loaf of bread. So take a look at this bad boy...

Still cooling, so I can't tell you what it tastes like, but it looks and smells divine. Feels like a winner to me!

While the bread was cooking, I needed some lunch and was under orders to use up the smoked salmon that had reached its 'eat by' date. Normally, we eat our smoked salmon on top of scrambled eggs on toast, but I couldn't be bothered doing scrambled eggs for one. So I tried something different - a smoked salmon and mushroom omelette. And I was glad I did!

So for future reference - slice a handful of mushrooms and fry in some butter until they turn colour and soften. Beat three eggs in a jug with some salt and black pepper, and add to the pan with the mushrooms and cook gently to set the bottom of the omelette. Slice your smoked salmon into long, thin strips and add to the pan. Continue to cook gently until the egg sets and the salmon begins to turn colour. If necessary, put the pan under a hot grill to set the top. Fold, turn out onto a warm plate and serve. Easy. I toyed with putting some cheese in but it really didn't need it - it would have distracted from the subtle taste of the salmon. A touch of lemon juice might have been nice but I decided against - you might want to experiment though! No pictures I'm afraid - it didn't last long enough!

Oh, the loaf just cooled enough for me to cut, so had a quick sample with some strawberry jam. Oh yes. Oooooh yes.

Or I could follow in the footsteps of my son, and become a music journalist. Well, I got my name in print today, so why not? Follow this link for the evidence - but be aware it's only up there for a week. I've blogged once or twice already about Amsterdam, but they remain one of my favourite bands - and are criminally underrated (and overlooked) by the mainstream music media. They are a great live band - and a great bunch of people as well. This is Matt and me with Ian Prowse, the band's lead singer, at Glastonbury last year. Who looks the most starstruck do you think? And no, I hadn't shaved for six days. And the beads? Because I can, folks. 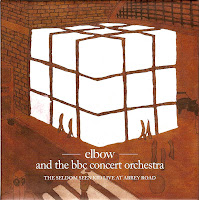 One of my favourite albums of the past few years is 'The Seldom Seen Kid' by Elbow. The album has just been released in a live version, re-recorded at Abbey Road with the BBC Concert Orchestra. Just watched the DVD of the performance that comes with the album - and they've made a great album even better. Elbow have been operating for a number of years just below the radar, but in the last twelve months they've really started to hit the bigtime, with some big festival performances, winning the Mercury and also being voted Best British Band at the Brits. Again, a great bunch of blokes who deserve all the success they get.

I'd be delighted if Amsterdam could break through in the same way - Elbow demonstrate that perseverence (and a stonking set of songs) can find you a way through the hype and bullshit that surrounds the music business. Sometimes the good guys do win!

Nice to listen to the Manics while I'm typing this. 'Everything Must Go' was their 'breakthrough' album, the first released after the dark and harrowing 'Holy Bible', and their first as a trio following the 'disappearance' of Richey Edwards. Everything Must Go is a fine album, although lacking the rough edges that made The Holy Bible a classic. A Design For Life is, by any standards, a great song, with one of the best opening lines ("Libraries gave us power, then work came and made us free") a hit single could have. After a short spell in the mainstream, the Manics seem to have retreated back into a less accessible place but sound none the worse for it.

Finally thanks to all of you who have sent messages - either on the blog, or directly - about Katy Teabag. We appreciate your thoughts and kind words, it really does help to know that people care - that they do 'get it' as I put it yesterday.
Posted by Paul Waring at 3:23 pm

If accountancy doesn't work. Bread making could be the making of you!!!