Day 41: After the Lord Mayor's Show 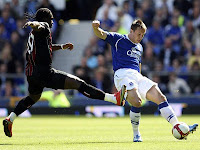 After the semi-final last Sunday, and the creditable draw with Chelsea on Wednesday, it was probably asking too much for Everton to find the energy for a third fantastic performance in the space of a week.

And so it proved - despite ringing the changes again, resting Tim Cahill and Joleon Lescott, the team looked off the pace today and ultimately didn't deserve to get a result against a City side that is still struggling to establish itself as a team, rather than just a group of (admittedly talented) individuals.

The game started brightly enough, with a fair degree of possession but no real cutting edge. Saha looks far better coming off the bench as an impact player than he does when he starts, and he was not linking particularly well with Fellaini upfront. In midfield, Osman looks in desperate need of a rest and squandered a lot of possession today and while both Neville and Castillo looked neat and tidy, there was little incisiveness in their passing.

Baines and Pienaar continue to link well down the left, and this is where most of our attacking threat is coming from at the moment. On the right, Robinho gave Tony Hibbert a torrid time all game, and it is no coincidence that both City goals came from breakaways down their left wing, through Robinho, who scored the first and made the second for Stephen Ireland, having pulled four defenders out of position.

We were unlucky not to score early in the second half, when Fellaini had an excellent volley on the turn saved point blank by Given, but overall we had little attacking threat until Moyes made three substitutions with half an hour to go, bringing Cahill, Gosling and Vaughan on for Castillo, Fellaini and Saha. 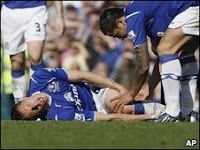 Unfortunately any chance we had of salvaging something from the game disappeared shortly afterwards, when Phil Jagielka landed awkwardly and twisted his ankle. It was immediately obvious there was something very wrong and he was stretchered off - later it was confirmed that he'd ruptured his cruciate ligaments and would not only be out for the rest of the season (missing the Cup Final, sadly) but would also most likely miss the start of the next. Desperately unlucky for the lad, who has probably been our best player all season. Hopefully he will come back fitter and stronger next year, along with all our other long term injuries.

More immediately, having used up all our substitutions not five minutes earlier, we were down to ten men for the rest of the game. To the team's credit, they kept pushing right up to the final whistle, getting a consolation goal through Danny Gosling in injury time. Too little, too late though, ultimately.

The day had started badly as well, getting a letter from out insurance company confirming that whilst our claim for mortgage cover was progressing, it would kick in twelve weeks later than we had anticipated - the element of redundancy payment I received that was in lieu of notice causing the claim to kick in only when that notice period expires. We'd not anticipated that so we need to adjust our budgeting - downwards - accordingly. Bit of a shock to the system, but we'll cope - we'll have to! 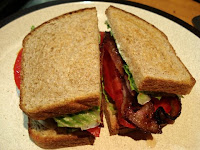 Ah well - at least the food was good today. I'd got up early to bake a crusty white loaf, that we used straight from the oven to make BLTs. The new electric knife allowed us to cut the hot, squishy bread easily, and the combination of warm bread, salty bacon and crisp lettuce and tomato was to die for. And in the evening we had a Chinese meal courtesy of Mr Marks and Mr Spencer, accompanied by my own fried rice in front of another very dodgy horror flick made bearable by a very nice bottle of Rioja. Tasty!

Soundtrack today comes courtesy of Bristol's own Massive Attack. 100th Window is not one of their better albums, but an average Massive Attack album is still better than most. While Jay-Z was attracting most of the attention last year at Glastonbury, I was otherwise engaged watching Massive Attack on the Other Stage. Good show, if a little clinical, with an excellent light show and a succession of guest singers running through a 'greatest hits' selection, including this stunning version of Unfinished Sympathy...