Today's soundtrack: The Pogues - If I Should Fall From Grace With God 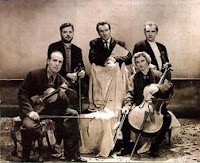 Out tonight to see Elvis Costello, performing with the Brodsky Quartet at the Bridgewater Hall in Manchester. Over the years, Costello has essayed many different musical styles, collaborating with a range of different performers including Burt Bacharach, Allen Toussaint and Paul McCartney - however his work with the Brodsky Quartet is possibly his most challenging collaboration - former New Wave iconoclast meets classical string quartet! They produced 'The Juliet Letters' in 1993, a song cycle themed around a series of different pieces of correspondence - love letters, begging letters, suicide notes, even junk mail. Largely misunderstood and underappreciated by the rock fraternity at the time, the album stands as a curio in the Costello catalogue - but one that stands revisiting and reappraisal. 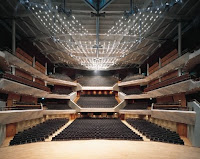 So 16 years after the album was released, Costello is once again performing with the Brodsky Quartet on stage, mixing highlights from the Juliet Letters with a number of rearranged Costello songs and covers. The Bridgewater Hall in Manchester is the ideal venue for such a performance - a classical concert hall that is finely acoustically tuned, allowing the delicate nuances of the performance to be captured and appreciated.

An unusual audience for an unusual production - a slightly older demographic dotted with younger 'rock' fans - but a mood more normally associated with a classical concert than your usual rock gig. Hushed and attentive - none of the underlying chatter that can blight the live experience these days. Perhaps a touch too respectful?

The performance was split into two halves with a short interval. Although the arrangements where largely for string quartet only, Costello did add acoustic guitar embellishments to certain songs, and performed a number of songs solo - including one new number performed at the front of the stage completely without amplification - the strength of his voice and the hall acoustics (and the hushed audience) allowing such a performance.

Not all the arrangements worked well - those written specifically for the quartet worked better for me - but a powerful reading of Shipbuilding and the Irish lament 'Raglan Road' were both incredibly moving and those arrangements did work well with the material. Costello was chirpy and entertaining throughout - explaining the background to certain songs and cracking jokes. Not so much the angry young man of the 70's any more, although a medley of 'I Thought I'd Write to Juliet' and 'Bedlam' more than hinted at the rage that still burns within Costello at the injustices he sees in the world. After over two hours on stage and a number of encores, the performance finished with a moving reading of 'The Birds Will Still Be Singing', described by Costello as "a song of condolence and renewal".

Earlier in the day I had to complete an on-line psychometric profile in connection with a potential new role - a task I found quite challenging, it being very difficult to pick the descriptions that 'best' and 'least' applied to me from a series of groups of four. I have found these profiles scarily accurate in the past, although completing them (and particularly with this one) I did feel that answering on another day, at another time, my answers might be completely different.

Ticket details announced for Wembley today - happily it looks like I have enough qualifying games along with my season ticket to guarantee a final ticket for myself - although I'm not sure that applies to the rest of the family. It all depends on whether the semi-final is a 'qualifying game' or not - sadly I suspect it is not.

Couple of calls from recruitment agencies today - one a 'holding' call in relation to an opportunity raised a week or so below, the other a touch more concrete, necessitating a bit of work tomorrow. Here's hoping!

Today's soundtrack comes from The Pogues, a group with some Costello connections - he produced their previous album (Rum, Sodomy and the Lash) and married their bass player, Cait O'Riordan. In fact, the last time I saw Costello live, the Pogues were the support band.

More varied than their earlier work, IISFFGWG added Spanish and other ethnic flavours to the Celtic style they had shown on their earlier work, and with this album Shane MacGowan's lyrics and melodies probably peaked - showing a maturity and range that was not fully apparent earlier, and that had yet to be affected by Shane's punishing lifestyle.

And the album includes the song that Mrs W hates with a passion, but which nonetheless is the greatest Christmas song ever written - Fairytale of New York, Shane duetting with the wonderful Kirsty MacColl.

A great album, and one that every home should own. Wonderfully sweary in places, too!