Apologies for the slight delay in service today - busy afternoon yesterday so playing catch up here.

The anticipated Saturday film got a big thumbs-down from Mrs W so a trip to Blockbuster had to be made to find a suitably appalling film to watch. This dovetailed nicely with a trip to Dominos to collect a couple of pizzas to eat whilst watching. I promise you some healthier food options in the coming days - but one has to pig out occasionally, doesn't one?

Oh yes - the film....if I told you that the 'star' of the film was one Vincent Jones, former 'professional footballer' and all-round bad guy, you can take a rough stab at the degree of quality we were aiming for, can't you? And whilst it won't be anywhere in the queue for the Oscars next time round, it did deliver on a number of levels. Not very challenging levels admittedly, but it passed a couple of hours very enjoyably. Anyway, it was called 'The Midnight Meat Train'. You will not be surprised to learn that blood and guts featured prominently, although - sadly - no gratuitous female nudity that I can recall. It does have some pedigree in that it was based upon a Clive Barker short story. Vinnie, bless him, does not get to speak a single word in the whole film (although he glowers a lot). This is eventually explained - Spoiler alert! - by the fact that his tongue had been forcibly ripped out by the roots at some stage in the past. Which is nice.

My God, we are shallow, aren't we?

Anyway, up early on Sunday to bake a loaf of bread for my Mum and to watch the Grand Prix. You can keep Eastenders, Corrie and The Apprentice - Formula One has to be the best soap opera on telly at the moment. Jenson Button continues to provide this year's 'rags to riches' story as the Team That Very Nearly Didn't Exist carries on winning, and McLaren convincingly play the part of the big bad bully in the corner, unblushingly telling fibs and hoping to get away with it.

For once, the race itself provided a great deal of drama, mostly provided by the weather, but I find the tactics surrounding the timing of pitstops, the choice of tyres and the varying ability of cars and drivers to stay on the racetrack when things get a bit hairy to be absolutely fascinating. A shame the race didn't make it to full distance - not for the first time in the history of televised sport, the demands of the schedulers taking precedence over simple common sense - but that added its own element of drama as the needs and desires of the governing body came up against the very clear 'bugger this for a lark' attitude of the drivers.

And if that wasn't enough excitement for one day, it was off to Goodison in the afternoon for the Everton - Wigan game. On paper, this could have been quite a tough game for Everton, Wigan just one place beneath us in the league and coming to us on the back of a decent set of results. They has beaten us 1-0 at their place earlier in the season and are a big, strong set of players - the sort we normally struggle against.

Well, as it turned out, it was a stroll in the park really. We were the pick of the two teams in the first half, passing the ball around well without really doing too much with the ball, whilst Wigan never really threatened our goal. Not much protection from the referee, Tim Cahill in particular getting some very rough treatment from Michael Brown, who was booked and failed to reappear for the second half - possibly to save him from a likely sending off. 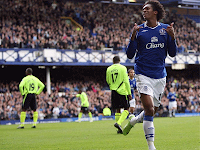 The deadlock was broken about halfway through the half, a good advantage from the referee freeing Osman, who played Jo in (possibly in a marginally offside position). A delightful left foot finish across the hapless Kirkland made it 1-0.

Second half, and just as my dad was saying we needed a quick second to settle things down, Fellaini duly delivered. Played in by Hibbert, he had plenty of room to turn and shoot low across Kirkland. 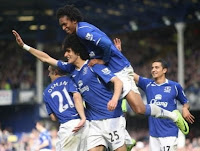 And five minutes later, the game was over as Kirkland could only palm out a shot from Fellaini straight into the path of Jo, who couldn't miss from six yards out. A fourth followed later, as Kirkland again couldn't hold onto a Fellaini shot, Osman this time the recipient of an easy rebound that he tucked away nicely.

With the game won, Moyes brought the kids (and Saha) on for Cahill, Fellaini and Pienaar and we played the game out in second gear, allowing Wigan to attack but without really looking like we'd let them back into the game.

4-0 then, a nice warm up for the next two games against Villa and United, who coincidentally were beating each other up at Old Trafford as we made our way home. And the perfect result there too, as a last-gasp United winner puts us within one point of Villa and United back above Liverpool.

And in other news, Andrew and Natalie next door brought their new baby daughter home as well. In the excitement we didn't quite catch the new baby's name - either Anna (or was it Isla?) Marie (Maria?). Nice to have some good news and share in some happiness after the upsets of the last week.

Black and Blue is not, by any stretch of the imagination, The Stones' finest hour. Their version of the reggae standard 'Cherry Oh Baby' is particularly awful - but it does have 'Fool To Cry' which (barely) justifies the price of admission. Anyway, it's on Spotify (along with 37 other Stones albums) so you can listen for yourself here. What do you mean, you haven't downloaded Spotify yet? Get it sorted!

Recipes - something will be posted later on today for your delectation - I promise!
Posted by Paul Waring at 9:05 am