Had an early evening out with Mrs W today - the company she works for uses Nunsmere Hall in Cheshire on occasion for functions and meetings, and she'd been invited along (+ guest) to see the result of a major refurbishment of the Hall, along with a couple of her colleagues. So I went along as Mrs W's '+ guest'!

Nunsmere holds one or two memories for us - not least because it's where we got married! It's a delightful old hall set in its own grounds on the edge of Delamere Forest, with a top restaurant and some very comfortable bedrooms. We really enjoyed the wedding there, the staff made us feel very welcome and comfortable and we promised to go back there.

I know. Miserable gets, aren't we?

Anyway, this was the first time we'd been to Nunsmere for a while, so we turned up, not knowing what to expect. We got there quite early, just as other invitees were beginning to arrive, and helped ourselves to the pink fizzy stuff on offer. Soon after, Mrs W's colleagues turned up and we had a good old root round, helping ourselves to a touch more fizz and a few nibbles as well.

And Nunsmere's looking good, although a few more nibbles might have been in order. The girls were hugely impressed by the presence of a photographer from 'Cheshire Life', shamelessly trying to get their picture taken so they could appear along with the rest of the 'Cheshire Set' in the next issue. I of course was not in the least bit bothered, although they did get a shot of me 'posing' with the Nunsmere literature early on. Not that I'll be scanning the pages of Cheshire Life to see if I'm in. Not at all.

Luckily they took my picture before both my shoes decided to split right down one side - nice brown loafers, really well worn in and comfortable, too. So rather than hang around with flappy bits of leather hanging off my feet, we made our excuses and left.

Home in time to see Chelsea take on Barcelona in the Champions league. A pretty dull game, Chelsea parking the bus in front of the Barca goal and hanging on for the 0-0 draw they obviously went for. In fact, they could have won it, having as few decent chances as Barca. Hopefully the ManYoo/Arsenal game will be better...

In other news, my CV went in for another role in Cheshire that looks quite interesting - a bit of tweaking of my experience to highlight the relevant bits (and there are one or two) - and back to the agency for submission to the company concerned. Hopefully hear a bit more later this week. 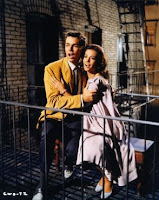 Soundtrack today is a 'soundtrack' in the truest sense - the the film 'West Side Story'. Now those of you who know me will now of my instinctive aversion to the 'musical' - and know of my refusal to go anywhere near 'Mamma Mia' when it was on in Manchester last year!

West Side Story could well be the exception that proves the rule though. I first became aware of WSS - bizarrely - through Alice Cooper's 'School's Out' LP, which includes a piece of the 'Jet Song' in 'Gutter Cat Vs the Jets', and through The Nice's version of 'America'. So the soundtrack had its rock creds firmly established before I saw the film itself - probably in black and white on a Sunday afternoon - and I loved it.

Leaving aside the jokey 'gang' songs ('Gee, Officer Krupke!' for one), the quality of the soundtrack and the showcase songs is superb - Maria, Tonight and Somewhere are all fantastic ballads...what's not to like? Oh, and the Pet Shop Boys' version of 'Somewhere' is also camp cheese of the highest order and comes highly recommended.

You wanna live in this lousy world? Oh yes, when the quality of the music is this good!