Right then. The rye bread. Despite the, er, pithy comments made by Mrs W when she saw the loaf yesterday (likening my creation to a housebrick - I mean, really....) I was up for a new taste sensation. And I have to say that I was pleasantly surprised. Yes, it's a touch (just a touch) heavier than the bread I've produced so far, but sliced and served as an open sandwich with a smear of mayonnaise and some breaded ham, it made for a very tasty (and filling) lunch.

Just what I needed to set me up for yet another trip to the Jobcentre which, again, passed very quickly and uneventfully. Can't say I'll ever get used to the feeling I get signing on - an 'edgy' sort of 'what am I doing here?' feeling - but needs must. I'm there because I'm unemployed - just like everyone else who is there signing on next to me. We're all in the same boat. 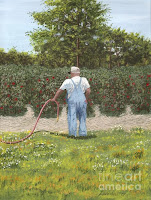 I'd parked up next to Homebase before signing on, and called in on my way back. Not sure what possessed me, but I came out with all sorts of gardening-type stuff, including big bags of compost, lawn feed, weedkiller and grass seed.

What's happening to me? Is this middle age beckoning?

Before setting out this morning, I took a call from one of my contacts over in Yorkshire who had heard of my situation, and he mentioned some plans he and another contact had to set themselves up as contractors. He asked me if I would be interested in being involved, at least in some initial discussions to see just what the prospects would be for such an endeavour. I confirmed I'd be happy to talk things through with them - not totally convinced it's right for me yet, but it's certainly an option that I want to give some serious consideration to, and to do it with people that I know and respect. I'm also delighted that they think I'm the sort of person they'd want to involve.

Finished reading 'Anathem' yesterday (see Day 11 - so it took 26 days to get through - that's a long time for me!) and enjoyed every page of it. Not an easy read as I have said before - but all the more satisfying for that. Moving swiftly on from the sublime to the ridiculous, I have started reading 'When We Were Thin' by C.P. Lee, a veteran of the Manchester music scene and the 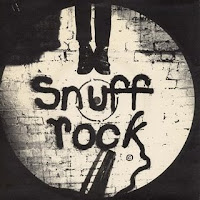 man behind anarcho-funsters Alberto Y Lost Trios Paranoias, who shone briefly in the late '70s with their blend of comedy, musical pastiche and general mayhem. The Albertos (as we shall call them) were probably best known for their 'Snuff Rock' ep, which gently poked fun at the musical scene of the time through the medium of songs about death - 'Snuffin' in a Babylon' and 'Gobbin' on Life' lampooning reggae and punk respectively.

And through the magic of YouTube, here are the boys back in 1978 doing two of the 'Snuff Rock' tracks - Snuffin' Like That and Snuffin' in a Babylon. Note the inspired use of an old bobble hat and some twisty telephone cable to provide instant dreadlocks for the second number.

Oooh - just seen the Snuff Rock ep on eBay, along with the 'Heads Down No Nonsense Mindless Boogie' single - two hours to go, no bids yet...might have to have a cheeky punt...

Today we are listening to the sublime Spiritualized. Songs in A&E is their latest album, recorded when Jason Pierce (who to all intents and purposes is Spiritualized) was recovering from a serious illness. It's by no means their best album - that honour goes to the remarkable Ladies And Gentlemen We Are Floating In Space - but it is still a very good album indeed. Spiritualized are playing at Latitude this year so - clashes allowing - I may well get to see them there.

This is the video for 'Come Together' from Ladies and Gentlemen... and a dashed fine track it is too.